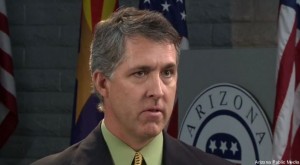 Shane Wikfors, communications director for Arizona’s Republican Party, didn’t take kindly to critical column published in The Arizona Republic about the state GOP politics. Moved to respond, he took to his blog, deeming the criticism by the columnist and another woman quoted in the piece a “bitch session.”

In the piece entitled “To dekook Arizona, start with the state Republican Party,” longtime columnist Laurie Roberts quoted Kathy Petsas — who’s “been active in GOP circles for decades” — lamenting the changes she’s seen in the party, observing it’s been “hijacked by these self interests and social interests.”

Wikfors responded on his blog, Sonoran Alliance, saying Roberts never bothered to call him or the party’s chairman, and that Petsas didn’t attempt to provide any constructive criticism. “Instead,” he wrote, “Ms. Petsas ran off to Laurie Roberts and engaged her in a ‘bitch session.'” He added:

Frankly, I’m getting a little tired of people like Kathy Petsas and even some of the political consultants who don’t do a damn thing for their Republican Party. They prefer to stand off in the corner and whine, complain, backstab and do absolutely nothing constructive.

Unsurprisingly, Roberts objected to the characterization. “It’s reprehensible, that kind of comment,” she told Phoenix television station KTVK. “It’s inappropriate and unprofessional for someone whose job it is to be a spokesman.”

In a phone interview with the station, Wikfors defended his word choice. “It’s a colloquialism,” he said. “It’s universally used. Go to any corporate boardroom and you’ll hear that reference.”