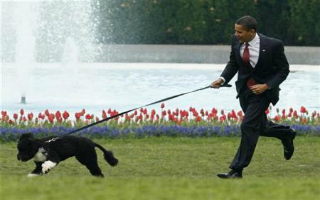 A recent George Washington University study of presidential pets concludes that President Barack Obama’s family dog, Bo, could be a political liability. According to the study, presidential pets do their owners more political harm than good in times of economic turmoil.

There have been many famous presidential pets. Some are simply stress-reducing fixtures in the White House while others have been used as political props in times of controversy.

One of President Richard Nixon’s most well-known speeches is remembered for his references to his dog Checkers. In the 1952 speech, Nixon invoked his dog to create a folksy, homespun tone amid his attempts to dodge accusations that he had used campaign funds to reimburse his political supporters.

Bill Clinton’s famous presidential pet, Socks the cat, became the subject of controversy when ABC News’ Brian Ross performed an exhaustive interview with the presidential kitty to determine if he was present when the President was engaging in extramarital relations with Monica Lewinsky.

Humor aside, the Ge University study suggests that, while presidential pets are often an enjoyable addition to the First Family, in times to economic turbulence or controversy they can become a liability.

The George Washington University report studied “presidents’ strategic use of their pets in public.” They use a rigorous methodology to determine that presidents’ should hide their pets from public view in tough times.

We present a theoretical framework and statistical evidence to explore the conditions under which presidents are most likely to trot out their four-legged friends. We show that presidents carefully gauge the best and worst times to conduct a dog and pony show. In times of war or scandal, dogs are welcome public companions, but not so in periods of economic hardship. 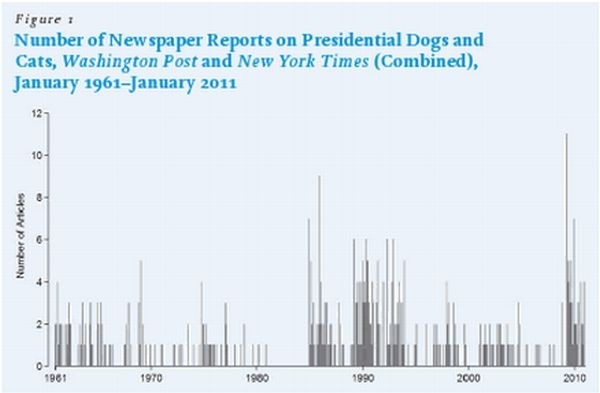 “We surmise that diversionary pets are a political liability when their frolicking on the White House lawn in hard times might cue the public that not everyone in the country is suffering equally and that being president is not a full-time job,” the study concludes.

The Washington Post’s Ezra Klein notes that the study’s authors are first to suggest that their report has limits when it comes to projecting electoral outcomes based on the presence or lack of White House pets.

They do concede that the study has limitations: The United States has, for example, been involved in military conflicts for the majority of the months studied here. Reporters also play a big role in determining how much they want to cover presidential pets which could lead to “conflating in the analysis of presidential pet-showing and newspaper pet-reporting practices.”