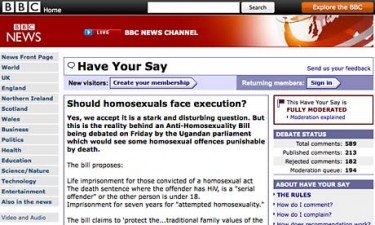 A top BBC official has apologized–sort of–for prompting an online discussion on the merits of executing gays, but the fallout has raised questions about the purpose of online discussions and whether you can really debate what some people consider a threatened genocide in Uganda.

The provocative question–Should homosexuals face execution?–was posted on BBC’s World Service Africa Have Your Say program’s online forum, immediately raising outrage both in the United Kingdom and the United States. The debate was eventually closed after 633 comments were sent to the Beeb.

The head of BBC’s World Service said in a Dec. 17 blog that the  headline  “was, in hindsight, too stark” but called the question a “legitimate and responsible attempt to support a challenging discussion about proposed legislation that advocates the death penalty for those who undertake certain homosexual activities in Uganda – an important issue where the BBC can provide a platform for debate that otherwise would not exist across the continent and beyond.”

A day earlier, the program’s editor said in a blog post that the BBC realized the question was provocative, but that he stood by the decision because “it accurately focuses on and illustrates the real issue at stake.”

The disconnect between the Beeb and activists is over whether it is possible to have a debate or discussion about the death penalty being applied to gays in Uganda, as proposed by a bill working its way through the Ugandan legislature.

Andy Towle of Towleroad fame said the problem was not with the headline, but the idea that “genocide should not be up for legitimate debate.”

The BBC should be condemning it. Discussing whether or not genocide is right or wrong is neither legitimate nor responsible, but abhorrent, and only serves to embolden those who would violate human rights in the UK and abroad.

Put more bluntly Dan Savage of Seattle’s The Stranger asked “would the BBC ask its readers if Jews should face execution? Gee… that’s a tough one…”

Peter Tatchell, a legendary gay rights “campaigner” in the UK, thought the headline was the problem. Tatechell, however,  said at Gays Without Borders that the Beeb wasn’t wrong in suggesting there needed to be debate and discussion of the proposed legislation, because “[e]ngaging bigoted views in debate is the best way to change them, or at least to change some of them. Challenging and refuting homophobic ignorance is the key to overcoming it.”

While the debate was roundly criticized in the U.S., the view was somewhat different in the U.K. where the media follows news from Africa.  The BBC is heard throughout Africa, especially its former colonies, including Uganda. As the comments showed, what is considered talk of “genocide” in the West is viewed as an effort–even if unreasonable–against Western influence in Africa.

It’s unlikely a major broadcaster in the U.S. would propose such a discussion on its website, for exactly the reasons critics like Towle and Savage made. But the UK press tradition is different and its focus on Africa is longer and more indepth. And, as Tatchell suggested “[i]t is a good thing to promote awareness and debate about this vile legislation, even if it means giving homophobes an opportunity to air their prejudice and hatred.”