Beck: Most Journalists “Just Punch The Clock” And Are “So Dead Inside” 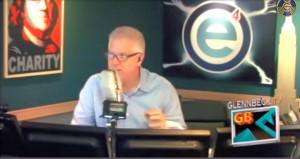 Today on his radio show, Glenn Beck was upset with President Obama for praising protesters in Egypt, so long as they are peaceful, yet for being so dismissive in the past of peaceful Tea Party supporters in America. However, Beck was even angrier with mainstream journalists for failing to draw connections in their coverage of the Egyptian uprising and concluded journalists are “so dead inside.”

Beck suggested journalists today just engage in groupthink, don’t independently investigate facts or think about the stories they are covering and that “most journalists just punch the clock at this point.” Such a passionless existence is Beck’s rationale as to why no journalist is investigating how dangerous the Muslim Brotherhood is, and just accepting the words of Egyptian Opposition Leader ElBaradei that they will not be a danger in a post-Mubarak Egypt.

Beck also was concerned with Obama’s description of a dictator without recognizing that, in Beck’s opinion, some of Obama’s behavior is similar:

“[The President says] a sign of a dictator is someone who shuts down radio and television and the Internet – tries to control it. At the same time in Congress, they are going for a kill-switch for the President on the Internet – that he has five of his White House advisors trying to shut me down.”

Apparently Beck is frustrated that he has to make all these “connections,” but if everyone else was making them, then what would there be left for him to do?