Ben Carson Thinks Some Weapons Should Be Outlawed: ‘Like, You Know, Tanks’
VIDEO

Ben Carson Thinks Some Weapons Should Be Outlawed: ‘Like, You Know, Tanks’ 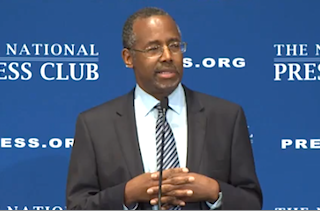 Dr. Ben Carson went out on a limb Wednesday and said not all weapons should be allowed under the Second Amendment. During a question and answer session with the National Press Club, the Fox News contributor and possible 2016 presidential candidate said that while he does not believe “people should have a rocket launcher in their bedroom,” he has no problem with “conventional” weapons.

Asked what he thinks this country’s gun policy should be, Carson answered, “I think there are some weapons that are probably not appropriate, like, you know, tanks. And I’m not sure that people should have a rocket launcher in their bedroom. But, you know, conventional weapons, I don’t have any problem with.”

From there, Carson praised the Second Amendment, which he said is in place to “give the populous the ability to assist the military in case of a foreign invasion.” But “more importantly” than that, he added, “if we ever have a rogue government that wants to dominate the people, the people will have the ability to defend themselves.”

At the same time, Carson criticized his fellow conservatives who have an “infantile attitude” when it comes to simply “engaging in conversation” about the Second Amendment, especially when it relates to areas that have large amounts of gun crime. He admitted to being critical of conservatives who impose “litmus tests” over gun control issues.”

It was more than a year ago, when he appeared on Glenn Beck’s show, that Carson created some controversy by saying that the right to have semi-automatic weapons should depend on where people live. Specifically, he thought the weapons should be banned in large cities, saying, “I think if you live in the midst of a lot of people, and I’m afraid that that semi-automatic weapon is going to fall into the hands of a crazy person, I would rather you not have it.”

Watch video below, via The National Press Club: