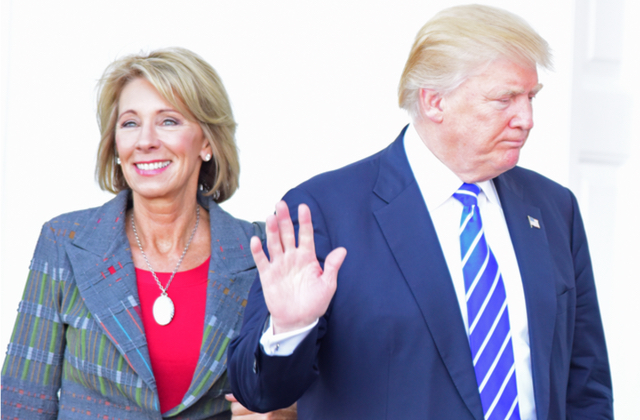 Just two weeks after Monica Crowley removed herself from consideration to be President Donald Trump’s foreign policy advisor in the midst of a plagiarism scandal, another Trump appointee is facing similar allegations. On Monday, Secretary of Education nominee Betsy DeVos submitted her answers in writing to over 800 questions from the Senate Education Committee, 139 of which were asked by Sen. Patty Murray, the ranking Democrat. On Tuesday, the Washington Post threw a monkey wrench into the proceedings when its reporters discovered that some of the responses were almost identical to existing texts that could be found online.

For example, there was this answer to a question about how to handle bullying of LGBT students:

Every child deserves to attend school in a safe, supportive environment where they can learn, thrive, and grow.

This, however, is from a May 2016 press release by Vanita Gupta, who ran the civil rights division of the Department of Justice under President Barack Obama:

Every child deserves to attend school in a safe, supportive environment that allows them to thrive and grow.

Other answers from DeVos used language that was taken verbatim from federal statutes themselves or DOE texts, like their website, without citing any of what she wrote as a quote. Asked if she would continue the tradition of making public all schools under Title IX investigations, she wrote:

Opening a complaint for investigation in no way implies that the Office for Civil Rights (OCR) has made a determination about the merits of the complaint.

Opening a complaint for investigation in no way implies that OCR has made a determination with regard to the merits of the complaint.

During the committee vote on DeVos, Murray outright said that “many of the responses look copied and pasted from previous statements or are simple reiterations of the law and no true responses at all.” White House education adviser Rob Goad issued a statement in response to the allegations that doesn’t include an outright denial:

This is character assassination. The secretary designate has long been referencing the need for safe and supportive learning environments, free of discrimination, for all students, so that they can learn, achieve, thrive, grow and lead successful productive lives. To level an accusation against her about these words included in responses to nearly 1,400 questions — 139 alone from the ranking member — is simply a desperate attempt to discredit Betsy DeVos, who will serve the Department of Education and our nation’s children with distinction if confirmed.