Betsy DeVos Expected to Announce Roll Back on Title IX 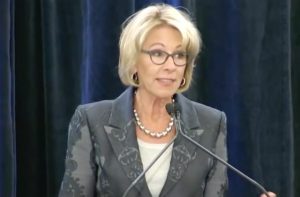 According to a Monday report by Buzzfeed News, education secretary Betsy DeVos, who spent her summer between meetings with “men’s rights activists” whose life work is to call women who report sexual assaults liars, is expected to announce a roll back on Title IX, a federal law banning sex-based discrimination in publicly funded institutions, on Thursday at George Mason University.

Federal officials have prefaced the event at George Mason with assurances that it will be “centered around equal opportunity and equal protection for all,” which in all likeliness means equating survivors with their assailants given this administration’s understanding of what equality is. After all, wasn’t it just last month that President Trump responded to events in Charlottesville sparked by a white supremacist rally by equating white supremacists to the people who protested them?

A roll-back on Title IX would be an unsurprising move by DeVos. In January, the education secretary, whose qualifications for the position include years of donating millions to Republican electoral candidates and advocacy for slashing funding for public schools, refused to commit to upholding Obama-era guidelines. These guidelines lowered the standard of evidence for people reporting sexual assaults on college campuses, and penalized universities that did not investigate sexual assaults or do so in a timely matter.

The Obama administration’s decision to lower standards of evidence for survivors has always been controversial, but it was a move to recognize that sexual assault is not like other crimes that fit so neatly within the traditional model of our criminal justice system. As a crime that so often involves trauma, stigma, and judgmental and sexist examinations of one’s past, survivors are often unable to gather perfect, seamless evidence, and have a lot to fear in coming forward to report their experiences.

President Trump won the general election in November just one month after a hot mic audio recording caught him and his bros laughing about how wealthy, celebrity men were entitled to sexually assault women, and so, naturally, sexual assault survivors’ rights advocates had pretty low standards for how the Trump administration would handle the issue of sexual assault. But it’s safe to say that over the past months, he’s still managed to shock and appall Americans with his actions.

The first time Trump dismissed and made light of the issue of sexual assault by attacking the women who accused him as liars by suggesting none of them were attractive enough for him to want to assault, his words showed other survivors who were keeping silent what would befall them if they over spoke up.

From its earliest days, his administration has been tainted with this history of silencing survivors and dismissing their experiences as unimportant — even false, altogether. But a rollback on Title IX would be a far more pernicious thing, altogether. It would signify that poor treatment of and disregard for survivors and young women go deeper than the president’s words and will shape the policies governing our everyday lives for years to come.