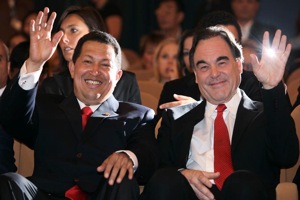 The realization came to Nolte upon his review of Stone’s new pro-Chavez, pro-socialism documentary South of the Border, which Nolte describes as “unforgivably dull” and argues is so laughably bad, it proves Stone is deliberately weakening the argument he proposes to support. I’ll let him explain:

“Far be it from me to pull a Patrick Goldstein and be the cause of a fellow righty landing on the conservative Hollywood blacklist, but news is news and the fact that for decades now Oliver Stone has been a right-wing spy embedded deep in the heart of Tinseltown and successfully producing one pro-American propaganda film after another through the devious use of reverse psychology IS NEWS. Besides, with ‘South of the Border‘ Stone effectively outs himself.”

Nolte then proceeds to explore Stone’s entire career for clues– from the American-dream-gone-wrong Scarface to “the greatest recruitment tool for Wall Street ever produced” to what Nolte sees an a sympathetic portrayal of Richard Nixon to the “absolutely brilliant”– and apparently secretly pro-America– JFK. As for South of the Border, apparently the pro-Chavez footage includes things like the Venezuelan strongman leader, er, “falling off his little sister’s bike.”

Nolte concludes by calling Stone “laughably incompetent”– or, rather, not calling him that, because he is a right-wing plant, which is really the place where the entire article unravels a bit. Calling Stone, one of the world’s most accomplished directors, “laughably incompetent” in general (and not specifying that, while actually quite talented in storytelling, may be a bit weak in the propaganda department) is a tough argument to get behind. And the only alternative Nolte gives is that Stone is a secret Rovian mole out to destroy the institutional left. But the one option left out is that he’s just a talented director with irreparably skewed worldviews that not even he can adequately sell, and as fun as it would be to imagine that level of intricate conspiracy theory, Occam’s Razor probably wins here.