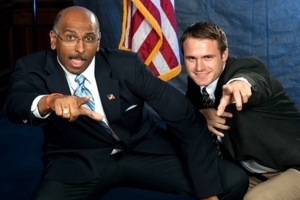 If you have followed the career of Republican Party chairman Michael Steele in any capacity, the title of this column should have already had you giggling. Michael Steele, a genius? “Moo moo” Michael Steele? Lesbian bondage-themed nightclub Michael Steele? Yes, there is a reason why Republicans love to hate on their chairman– but it isn’t because of his gaffes.

Steele is in the news again for getting caught proposing insanely foolish talking points on a slow news day. Namely, he made the laughably false argument that Afghanistan is “a war of Obama’s choosing,” and that this would be a successful angle for candidates to take during the midterm elections. Right-wingers in the political media world went predictably bonkers while the lefties grabbed the popcorn. It didn’t take long for the usual outrage, disbelief, and calls for resignation to surface. At this point, the monthly Michael Steele Resignation Rallies should be an official part of the RNC’s budget.

No one is going to defend Steele’s statements, since even if they weren’t meant for cameras at the time, he displayed an intention of driving the “Afghanistan as Obama’s war” talking point to the public. But here’s what people like Bill Kristol— who wrote an open letter to Steele asking him to resign– and the myriad angry conservative leaders are missing about Steele’s M.O.: By virtue of consistently making indefensible comments, he makes himself the target of ridicule and thus shields his candidates across the country. It’s pretty clear Steele doesn’t intend to be framed constantly as the GOP Class Clown– who would want to be– but by virtue of doing so, he is helping fuel an “outsider” narrative that is appealing to nearly everyone on the political spectrum.

The strategy only works locally, when there are too many elections happening simultaneously for it to be plausible for the average American to follow them all. Anyone taking a broad look at the national Republican landscape would notice that all the candidates for Congressional and gubernatorial positions are acting in lockstep, silently distancing themselves from their embarrassing “drunk uncle” of a chairman while media characters with nothing at stake (i.e. Kristol) take on the offensive role.

But zoom into one district or one state and you’ll see one candidate bravely going against his party’s establishment, sticking to his or her convictions and condemning an unpopular chairman despite the power he holds, challenging the status quo, leading a call for change, and doing other buzzwords that independent voters like so much. It’s the same sort of logic that makes Americans love their Congressional representatives so much while being completely disgusted by the institution of Congress. Stare at any one district and you’ll see a maverick, because political myopia will blur away the fact that the GOP isn’t a party of mavericks, but that the maverick is running the party— or, as some dogmatic conservatives might see it, the lunatic is running the asylum.

This isn’t the first time Steele starts misbehaving during an important time for his party, and it isn’t the first time he has sacrificed himself as lightning rod to make others in his party look appealing either in comparison or in opposition. In fact, it is precisely this in kind of blatantly counterproductive nonsense that Steele indulged while candidates like the somnambulant Virginia governor Bob McDonnell and Sen. Scott Brown who, handsome though he may be, is still a Republican in Massachusetts, were winning their elections (New Jersey governor Chris Christie, who ran on an anti-corruption campaign that was completely incongruous with anything happening on the national scale, is probably an anomaly). What was Steele up to in the weeks before Brown’s historic win? Driving the GOP to bankruptcy, publishing secret strategy books and saying things like “honest injun.” Before the November elections? Launching a blog called “What Up?”, complete with animated .GIF of himself. The Republican candidates knew better than to open that can of worms and stuck to local issues, instead. It seems every time Republican campaigns need to come out strong with concrete policy, Steele tosses out a new surrealist hot potato that lets the campaigns focus on the issues within their jurisdiction.

It’s quite possible that Steele is actually the incompetent fool the real Republican establishment would like to paint him as, especially after this latest gaffe in his repertoire. Maybe the party’s successes really have been despite his presence, not because of it. But the fact remains that the Steele-led Republican Party has been knocking it out of the park since November, and the face of the party is becoming both more diverse and more formidable. And when anti-establishment fervor becomes a lot easier to sell when the establishment brings seemingly endless public embarrassment. Even if it isn’t part of a larger plan, Michael Steele hasn’t been all bad for his party.