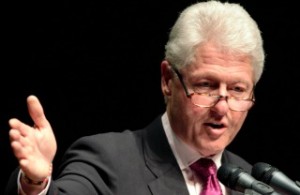 It’s time to overturn the Defense of Marriage Act, argued former President Bill Clinton in the Washington Post, after signing in into law in 1996. Over time, Clinton said he’s come to see the act is discriminatory and “incompatible” with the constitution.

When he signed DOMA, it was a different time — when no state recognized same-sex marriage, “but some were moving in that direction.” That led to some “quite draconian” responses from Washington, Clinton recalled, noting that the bill came to his desk opposed by only 81 members of Congress.

Now that the matter is before the Supreme Court, as the person who signed the law, Clinton said he has “come to believe that DOMA is contrary to those principles and, in fact, incompatible with our Constitution.” He explained his thought process thusly:

Concluding the piece, Clinton asked a question, quoting President Abraham Lincoln: “It is not ‘Can any of us imagine better?’ but ‘Can we all do better?’”

Yes, Clinton answered. “In that spirit,” he called on the Supreme Court to overturn the law.

Recently, the Obama administration has weighed in on the matter, filing a brief urging them to overturn DOMA. Another brief was signed by more than 100 Republicans, and yet another by over 200 companies, who also support administration’s stance.