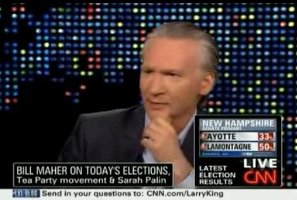 Bill Maher was Larry King’s guest on Larry King Live tonight, and the results were…well, they weren’t surprising at all, if you know Bill Maher. There was talk about Obama, Republicans, Tea Partiers, birthers, “churchers” (a new one invented by Maher) and tonight’s most momentous primary result…but mostly, as there usually is with Maher, there was zero middle ground.

After John King interrupted Larry King’s broadcast to announce the Delaware primary for Tea-Part-backed candidate Christine O’Donnell, Larry king discussed the result with Maher. Maher’s takeaway was that “Democrats should be very happy” that the likes of O’Donnell are winning primaries, because:

“I think voters are generally conservative. And…when I say ‘conservative,’ I mean – they’re not comfortable with people who are out there, on the left or the right. And these teabaggers are out there.

Certainly Christine O’Donnell could not win in a state like Delaware. Because she’s just crazy…even people who are angry understand that crazy people are not gonna make it better.”

Time will tell, although the consensus certainly does seem to be that Democrats were just done a huge favor by the result. Talk then turned to anti-Obama sentiment. Maher first parodied birthers by recounting a recent conversation with Jay Leno where he said we can’t be totally sure Leno’s not a werewolf. Then, he unveiled his new term: “churchers,” for those who believe the president is not a Christian. Why do people believe such things? Maher’s response: “The internet makes people stupider.” Oh, and Fox News, too. It’s Bill Maher, after all.

But the biggest fireworks came when Maher was asked if there are racist overtones to Obama hate. His answer (“Yes, Larry, it’s extremely racist”) should surprise no one, and his follow-up zing was classic Maher:

An extreme, unfair, over-generalization? Of course. A pretty well-delievered punchline? Well…actually, yes to that as well. Maher continued by ripping conservative pundit Dinesh D’Souza (currently in the headlines for this), mostly for personal reasons.

And that’s the problem – Maher has talent. He can craft a joke, as well as good arguments when he doesn’t get too crazy. But too often, he’ll do things like go off on a tangent that Dinesh D’Souza didn’t support him enough one time, and it detracts from the overall point. Maher had his strong moments in his interview with Larry King tonight, but he had his own moments of craziness as well. Maher’s got to heed his own words – crazy people are not gonna make it better. Video of the post-Delaware announcement portion of the interview below.