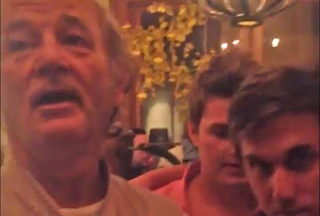 The epic mythology of Bill Murray grew to even greater heights this weekend when the legendary comedian briefly crashed a bachelor party in Charleston, South Carolina. The 63-year-old actor is well known for running up behind people, covering their eyes with hands before revealing himself and saying, “No one will ever believe you.” While stories like that are, well, hard to believe, this one has video proof.

“You know how funerals are not for the dead, they’re for the living?” Murray asked the group, before getting a laugh from the group by explaining that bachelor parties are not for the groom, but rather for everyone else. That being said, he offered some serious, time-tested advice to all the single men in the room:

“Here’s what I recommend to you. If you have someone you think is the one, don’t just sort-of-think… let’s make a date, let’s plan this and make a party and get married. Take that person and travel around the world. Buy a plane ticket for the two of you to travel all around the world and go to places that are hard to get to and hard to get out of. And if when you come back to JFK, when you land in JFK, and you’re still in love with that person? Get married at the airport.”

One of the men in attendance apparently sent video of the unexpected encounter to Deadspin, along with the this account of how the whole thing went down:

Over Memorial Day weekend, 20 of my buddies from Boston College got together in Charleston for our friend EJ’s bachelor party. At one point during dinner at a steakhouse, one guy goes to the bathroom downstairs and sees Bill Murray sitting with some people with a fishing vest on. We talked to the waiter to see if we could send him some drinks, to which Bill declined. One of my buddies then went down and asked if he’d come up and say a few words for EJ and got a “No thanks.” My buddy comes back up dejected and tells us it’s not going to happen. Two minutes later, Bill fucking Murray walks into the room and gives this speech.

Watch video below, via Deadspin: