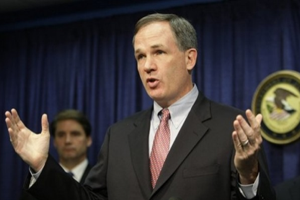 It’s been a big week for Rod Blagojevich, the former governor of Illinois who made a name for himself after committing acts that US Attorney Patrick Fitzgerald declared would “make Abe Lincoln roll in his grave.” Except the jury couldn’t convict him on 23 of those 24 charges, and now the tables have turned on Fitzgerald, with the media rallying against a retrial and the Wall Street Journal calling for Fitzgerald’s resignation.

Judge James Zagel has already said he intends to call a retrial, especially in light of the news that Blagojevich was one juror away from a complete conviction. Many, however, seem to question the reasoning behind going through the entire process all over again. Reporters at Reuters and the Chicago Tribune have speculated that having yet another trial, especially so close to the midterm elections. In Illinois, questions are being raised over whether the money it will cost to host the retrial and defend Blagojevich will be worth it. And then there’s the positive press; Roger Simon at Politico is literally “cheering” for Blagojevich after his legal success. But perhaps the most unexpected reaction to the possibility of a retrial has been the backlash on Fitzgerald, who is now facing criticism for his failure to get Blagojevich convicted of most of the charges that extends as far as calling for his resignation.

In an editorial today, the Washington Post warned that a retrial could “cross another fine line” into “persecution” of the governor, rather than mere investigation. It wasn’t exactly a glowing piece for Team Blago– “the Blagojevich brand of politics is repugnant, beyond any doubt. It perverts democracy and puts moneyed interests over the common good,” it argues– but nonetheless the editorial calls for Fitzgerald to “stand down”– he “took his shot and lost.”

The Wall Street Journal was not as kind to Fitzgerald, calling for his resignation whether Blagojevich is innocent or not. If he is, the initial arrest and press conference was an overreaction on Fitzgerald’s part, and if he’s not innocent, “incompetence alone is grounds for Mr. Fitzgerald’s removal.” They describe Fitzgerald’s behavior as “unaccountable federal prosecutor run amok.” Nor do they limit themselves to the Blagojevich trial, citing several scandals in which Fitzgerald took a part and came out in the wrong:

Blagojevich may or may not be corrupt, though he has repeatedly proved his stupidity. In any event, Mr. Fitzgerald’s legal team failed to persuade a jury that Blagojevich was guilty of racketeering, conspiracy, wire fraud, extortion, kickback schemes and a litany of other crimes, despite five weeks of argument and testimony that included incriminating selections from thousands of wiretapped phone calls. The defense did not call a single witness. The jury also deadlocked on four charges against Blagojevich’s brother, while his chief of staff earlier copped a plea. […]

If Mr. Fitzgerald doesn’t resign of his own accord, the Justice Department should remove him—especially after such other recent examples of prosecutorial bad faith or bad judgment involving Blackwater contractors in Iraq, the forgotten backdating accounting scandal and the late Senator Ted Stevens.

Who would have thought two years ago that the person to come out the worst out of the entire Blagojevich mess would be someone other than the colorful ex-governor? Fitzgerald, should he go forward with the retrial, still has a change to redeem himself, although the circus atmosphere surrounding the first trial seems to only be growing stronger in anticipation of the second round– Blagojevich’s attorney has already said he would try to drag President Barack Obama into the second trial while the governor himself busies himself selling various Elvis-themed tchotchkes for charity.