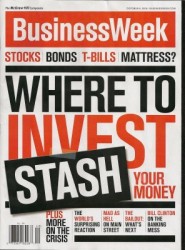 Jon Fine reports that financial information giant Bloomberg LLC has submitted a bid to acquire his own magazine, BusinessWeek, making Bloomberg the presumptive favorite in purchasing the troubled title.

As we reported last week, Bloomberg expressed interest in BusinessWeek late in the process, but was given extra time to perform due diligence.

Regarding the bid, Fine reported today:

After being given a few days’ grace past the September 15 deadline for final bids for BusinessWeek, Bloomberg LP submitted its bid for the 80-year old business magazine, according to executives familiar with the situation.

Other than Bloomberg, among the bidders—plural, as there are more than one—for BusinessWeek is OpenGate Capital, the private equity firm that owns TV Guide magazine.

A bid from Bloomberg is widely expected to make the business information giant the prohibitive favorite to purchase BusinessWeek.

Fine seems to imply that the acquisition of BusinessWeek is a “good idea.” Or is that just wishful thinking?