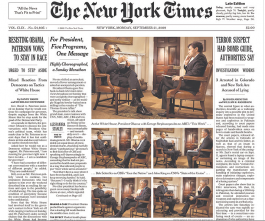 Did President Obama’s Sunday media blitz make a difference? It’s hard to tell, though the headlines would suggest that the takeaway thus far seems to be split between issues of race and Obama’s ability to manage the media. Also, the lack of a takeaway line — beyond the fact Obama is still holding out for the White Sox — is telling. Kanye West may be a jackass but he also has his own viral twitter avatar — rude works! As the President is apparently painfully aware. Alas, considering the White House prides itself on being our first 2.0 presidency they don’t appear to package soundbites all that well these days!

However! That’s not to say the President didn’t repeat himself. In today’s New York Times Alessandra Stanley says the interviews were “as tightly choreographed — and eerily similar — as the multiple Magritte bowler-hatted men milling in the remake of “The Thomas Crown Affair.”” Snap! But what if anything did this uber media savvy President have to say about the press is spends so much of his time courting? Mostly that the media loves rude. And he said it a lot.

Obama used the word rude in no less than four interviews when talk turned to media coverage (perhaps this is the PC translation of ‘jackass’). So there you have it, turns out the President know exactly what it takes to get on a TV in a “hot second” he’s just not employing it because, in the words of Peggy Noonan he’s doing so much TV because “because he can, because people do what they know how to do.” Maybe he will embrace his own “rude” side this evening when he stops by David Letterman. One can only hope. The health care bill needs a slogan! In the meantime here’s a ‘rude’ look at Sunday’s magical media tour.

“The media encourages some of the outliers in behavior, because, let’s face it, the easiest way to get on television right now is to be really rude.”

ABC’s This Week With George Stephanopoulos

And — and sometimes I think that, frankly, the media encourages some of the outliers in behavior, because, let’s face it, the easiest way to get on television right now is to be really rude. If you’re just being sensible and giving people the benefit of the doubt and you’re making your arguments, you don’t — you don’t get — you don’t get time on the nightly news.

OBAMA: But if you — if you say something outrageous, you’re there in a hot second.

And I have to, one last point I’ve got to make, Bob, and that is I do think part of what’s different today is that the twenty-four-hour news cycle and cable television and blogs and all this, they focus on the most extreme elements on both sides. They can’t get enough of conflict, it’s catnip to the media right now. And so the easiest way to get 15 minutes of fame is to be rude to somebody. In that environment I think it makes it more difficult for us to solve the problems that the American people sent us here to solve.

And— unfortunately, we’ve got, as I’ve said before, a 24-hour news cycle where what gets you on the news is controversy. What gets you on the news is the extreme statement. The easiest way to get 15 minutes on the news, or your 15 minutes of fame, is to be rude…Well, you know, the— I— I— I do occupy— a pretty special seat at the moment. But— but I do think that— look I mean, let’s face it, the— if you look at the news cycle over the last— over the last week— you know, it— it— it hasn’t been the— the sensible people who, you know, very deliberately talk about the important issues that we face as a country. That’s not the folks who’ve gotten a lot of coverage.

CNN State of the Union

I think it’s important for the media, you know – not to do any media-bashing here – to recognize that right now, in this 24-hour news cycle, the easiest way to get on CNN is or Fox or any of the other stations, MSNBC is to say something rude and outrageous…If you’re civil and polite and you’re sensible and you don’t exaggerate the-bad things about your opponent and you know, you might get on one of the Sunday shows. But you’re not going to be on the loop. And, you know, part of what I’d like to see is all of us reward decency and civility in our political discourse.