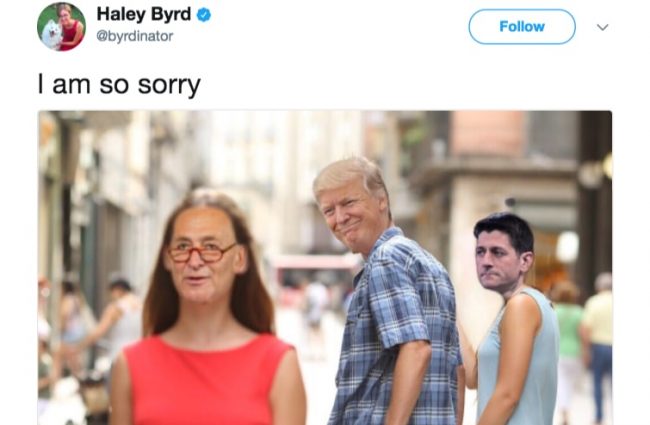 The latest episode of President Donald Trump brought a surprise twist last night when the real estate magnate-cum-leader of the free world decided to back a temporary Democratic government funding plan and buck his traditional GOP allies.

A not insane theory of what happened today is that Trump is still mad at Ryan and McConnell and sided with Schumer and Pelosi to spite them.

And it went from there.

Big test for the Trump / Fox and Friends relationship tomorrow morning re: Schumer/Pelosi agreement. Who will blink first?

Latest buzz from Trump Train: “See, he made Schumer and Pelosi agree to his debt ceiling deal! #MAGA!”

The indoctrination is impenetrable.

Trump aligns himself with Schumer and Pelosi on Congress authorizing DACA. “Chuck and Nancy would like to see something happen and so do I.”

Trump hadn’t met with Schumer and Pelosi for months. After seeing them today, he quickly breaks with GOP leadership and sides with them.

2 sentences from Trump’s gaggle on AF1 that are extremely telling: he said “We had a very good meeting with Nancy Pelosi and Chuck Schumer.”

I wonder how much Trump would accomplish if he just accepted Schumer/Pelosi offers: infrastructure, trade, Defense $, etc.

BUT THE WINNER OF THIS GAME?

I am so sorry pic.twitter.com/7Z7cD2d2Oa