Bob Dylan: ‘Government’s Not Going to Create Jobs,’ People Have to Do It

Bob Dylan: ‘Government’s Not Going to Create Jobs,’ People Have to Do It 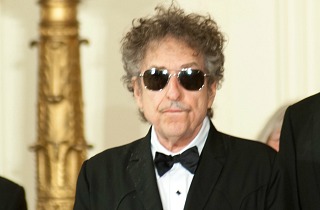 The ever-elusive and inscrutable Bob Dylan gave an interview this week to AARP The Magazine, in promotion of his new record Shadows in the Night, and what he had to say about government and job creation has created some buzz on the Internets.

Asked whether he has ever touched or experienced true happiness, Dylan waxed poetic about entropy, heartache, and how the need to create and the pursuit of happiness are inextricable.

Somehow that led to his thoughts on the role of government [emphasis added]:

As long as there’s suffering, you can only be so happy. How can a person be happy if he has misfortune? Some wealthy billionaire who can buy 30 cars and maybe buy a sports team, is that guy happy? What then would make him happier? Does it make him happy giving his money away to foreign countries? Is there more contentment in that than in giving it here to the inner cities and creating jobs? The government’s not going to create jobs. It doesn’t have to. People have to create jobs, and these big billionaires are the ones who can do it.

“We don’t see that happening,” he lamented. Instead, rock’s greatest bard said, “We see crime and inner cities exploding with people who have nothing to do, turning to drink and drugs. They could all have work created for them by all these hotshot billionaires. For sure that would create lot of happiness.”

“What do they do with their money?” he asked of the wealthiest Americans. “I’m not talking about communism,” he cautioned, but asked, “Do they use [their money] in virtuous ways?”

[T]here are a lot of things that are wrong in America, and especially in the inner cities, that they could solve. Those are dangerous grounds, and they don’t have to be. There are good people there, but they’ve been oppressed by lack of work. Those people can all be working at something. These multibillionaires can create industries right here in America. But no one can tell them what to do. God’s got to lead them.

For what it’s worth, Dylan has echoed this sentiment in his own recorded material. His 1983 record Infidels includes a scorching track called “Union Sundown” with the refrain: “Well, it’s sundown on the union / And what’s made in the U.S.A. / Sure was a good idea / ’Til greed got in the way.” Listen below: