Bobby Jindal Allegedly Exorcised a Woman and Wrote About It

Bobby Jindal Allegedly Exorcised a Woman and Wrote About It 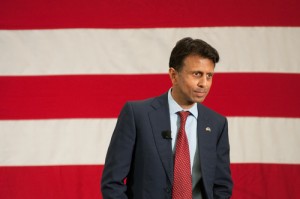 Before Louisiana Gov. Bobby Jindal became a GOP candidate for the 2016 presidential elections, the Oxford University alumnus and Rhodes Scholar supposedly did something that none of the other presidential hopefuls ever have. He helped exorcise a woman of her demons — and not in the figurative sense, either. We’re talking smelling of sulfur and exclamations of “Jesus is Lord,” people.

As The Washington Post reports, the story of Jindal’s religious experience isn’t anything new. Many other publications, from local Louisiana papers to The New York Times, have brought the episode to light before. Even so, it has never significantly affected Jindal’s political career.

The governor, who converted from Hinduism to Christianity in college, wrote about the experience for the New Oxford Review in 1994. Titled “Beating a Demon: Physical Dimensions of Spiritual Warfare,” the essay recounts Jindal’s experience with a woman named “Susan” while he was at Brown University:

Suddenly, Susan emitted some strange guttural sounds and fell to the floor. She started thrashing about, as if in some sort of seizure. Susan’s sister must have recognized what was happening, for she ordered us to gather around and place our hands on Susan’s prostrate body.

I tentatively ap­proached the group and placed the edge of my finger­tip on her shoulder … In a voice I had never heard before or since, Su­san accused me: ‘Bobby, you cannot even love Susan.’

The students, led by Susan’s sister and Louise, a member of a charismatic church, engaged in loud and desperate prayers while holding Susan with one hand. Kneeling on the ground, my friends were chanting, ‘Satan, I command you to leave this woman.’ Others exhorted all ‘demons to leave in the name of Christ.’

Whenever I concentrated long enough to begin prayer, I felt some type of physical force distracting me. It was as if something was pushing down on my chest, making it very hard for me to breathe. Being a biology major at the time, I greeted this feeling with skepticism and rational explanations. I checked my pulse for signs of nervousness and wondered what could cause such a sensation. Shortness of breath is a common symptom that can mean very little or may signal the onslaught of a fatal stroke. Though I could find no cause for my chest pains, I was very scared of what was happening to me and Susan. I began to think that the demon would only attack me if I tried to pray or fight back; thus, I resigned myself to leav­ing it alone in an attempt to find peace for myself.

…The students dared Susan to read biblical passages. She choked on certain passages and could not finish the sentence ‘Jesus is Lord.’ Over and over, she repeated ‘Jesus is L..L..LL,’ often ending in profanities.

Just as suddenly as she went into the trance, Susan suddenly reappeared and claimed ‘Jesus is Lord.’ With an almost comical smile, Susan then looked up as if awakening from a deep sleep and asked, ‘Has something happened?’

WaPo goes on to note that, considering the largely Christian makeup of the United States electorate, and the fact that exorcism is recognized by the Roman Catholic Church, digging up this episode from Jindal’s past probably won’t have any major detrimental effect on his campaign. If anything, it merely coalesces with the majority.

Besides, as Jindal himself put it in a statement to the New Orleans Times-Picayune in 2012:

I wrote a lot of stuff in high school and college. While other kids were out partying, I was reading and writing. I’m sure some of that stuff is goofy. I just hope they don’t review my grade school work

True enough, Governor Jindal. There’s a lot of crap I wrote in college that I’d never want to see the light of day. Then again, I didn’t put any of it in the New Oxford Review.