Bobby Jindal Is Trying to Pick a Fight with Ted Cruz

Bobby Jindal Is Trying to Pick a Fight with Ted Cruz 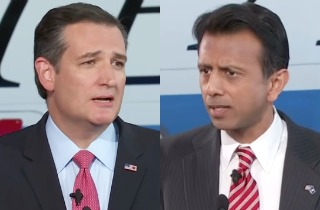 Bobby Jindal is already on record not liking Donald Trump, but today he seems to be picking a fight with another candidate he thinks is desperately trying to leech onto him: Ted Cruz.

Yes, throughout this campaign, the Texas senator has been praising Trump, defending him, and refusing to criticize him because he believes the liberal media loves it when Republicans fight and so he will not give them what they want.

(Cruz has attacked one very prominent Republican, Mitch McConnell, by accusing him of lying; critiques that earned him scolding from his colleagues and accusations of hypocrisy on attacking fellow Republicans.)

Now, some have suggested this reticence on Cruz’s part is due to his eagerness to grab Trump supporters if he ends up staying in the game longer, and Jindal seems to agree.

Last month Jindal swiped at Cruz by clinging to the “madman” Trump, but now that he’s gotten some mojo out of ripping Trump, Jindal’s still going strong and taking more shots at Cruz.

First Jindal put out an op-ed attacking Trump for supporting “the government takeover of health care” and saying, “Even conservative senators like Ted Cruz are complicit. He has distinguished himself by praising Trump’s positions and clinging to his events, in the hope of picking up his votes when he eventually fades.”

And then, in case it wasn’t clear Jindal was trying to pick a fight with Cruz, he’s started tweeting at him:

If @TedCruz refuses to denounce @realDonaldTrump‘s universal healthcare plan, he is complicit in it: https://t.co/evFnU8GMm6

.@TedCruz why won’t you stand up to @RealDonaldTrump on single payer healthcare? That’s not conservative leadership. https://t.co/v0syXaSAf7

We will add more if this continues (and given the campaign so far, it probably will).