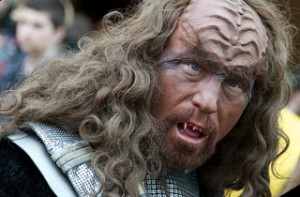 Trekkies and language enthusiasts continue to wage legal battle with the suits at Paramount over the Klingon language.

The legal kerfuffle began when Paramount Pictures — which owns the Star Trek property — sued the producers of a fan-made film set in the Trek universe, alleging a series of copyright infractions, one of which being the use of the Klingon language.

This drew the attention of the Language Creation Society (LCS), whose stated mission is to promote the art and craft of language creation. The LCS argued in an amicus brief filed on Apr. 27 that the Klingon language may have invented for use in the Trek franchise, but it has become a living language in the hands of dedicated fans, who have developed it into rich idiom with its own customs, slang, and even a translation of Hamlet.

The brief included a lengthy discussion of the Klingon language and even incorporated several Klingon phrases into its argument.

Paramount is protesting that the LCS “should not be permitted to insert itself in the litigation at this stage in the proceedings to add unnecessary complication,” they write in a brief filed Tuesday. The question of whether or not a language can be copyrighted is dismissed as “hypothetical.” They add that the brief is “untimely, irrelevant, and procedurally improper,” and should be dismissed.

Axanar, the group producing the fan-financed film and the defendants in the case, filed a response to Paramount’s objection, accusing the company of muddying the waters and being “[u]nable to counter the undisputed fact that fans do use the Klingon language to communicate.”

For their part, the LCS has said they are not taking a side on any of the several other alleged infractions — a lengthy list that includes the familiar pointy ears of Vulcans and the Federation gold shirt worn by Captain Kirk. In a statement, they said they would be happy either if Paramount formally drops, or the court dismisses, their claim to own the Klingon language. Otherwise, the studio should “take some time and file an actual response on the merits […] and defend their claim to own the language .”

In their own reply, LCS maintains that it is a legitimate and relevant legal question whether or not Klingon can indeed belong to anyone.

Axanar argues that while Paramount may own the likeness of Klingons or even own the copyright on the Klingon Dictionary, “the individual Klingon words contained therein and expression flowing from the Klingon language system are simply not protected.”