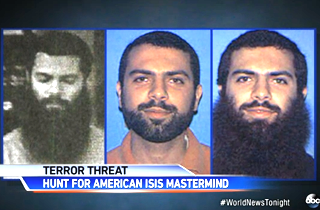 ISIS’s social media savviness — its slick videos and elaborately-staged executions are engineered specifically to go viral — has distinguished the terrorist group from its predecessors, and may be the reason the group is so successful at picking up recruits. According to the FBI, it’s the work of one American: a computer professional from Boston who left the country to seek out terrorist training.

By all accounts Ahmad Abousamra was raised like a normal Boston overachiever: his father was a prominent endocrinologist who taught at Harvard, and he attended an elite private school (Xaverian Brothers), then went on to attend Northeastern University. But in 2004, according to the FBI, he and a group of friends plotted to go to the Middle East to train with terrorist cells. Abousamra, who carries dual US and Syrian citizenship, left America for good after he was questioned by the FBI about his trip in 2006.

According to ABC, Abousamra, who has a background in telecommunications, appears to be the source of ISIS’s social media campaign. “ISIS understands very well that in order for an act of terrorism to be effective, it needs to actually terrorize people,” said Peter Neumann, Director of the International Centre for the Study of Radicalisation (ICSR). “The act of communication that follows the act of violence is almost as important as the act of violence itself.”

The FBI has placed Abousamra on its Most Wanted Terrorists list, offering a $50,000 reward for any information leading to his capture, and says it shouldn’t be difficult to pick him out: he has a “high-pitched voice that would distinguish him from others.”