Bowe Bergdahl Would Like to Thank Obama for ‘Saving His Life’

Bowe Bergdahl Would Like to Thank Obama for ‘Saving His Life’ 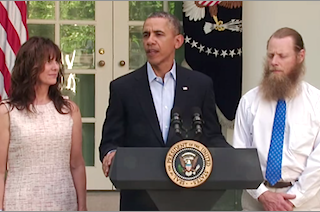 Since being released by the Taliban after five years in captivity more than six weeks ago, U.S. Army Sgt. Bowe Bergdahl has had no interaction with the media. But now, he has sent a message through his new lawyer, Eugene Fidell, who spoke to The Daily Beast Wednesday. “Sergeant Bergdahl is deeply grateful to President Obama for saving his life,” Fidell said.

Earlier this week, the Army announced that Bergdahl would be returning to active duty as the investigation into how he ended up leaving his Afghanistan base and becoming a prisoner of war proceeded.

“The Army, which has done much more poking and prodding with him over a much larger period of time, concluded he was in a position where he could be put in duty status and that’s where they have him as of Monday,” Fidell said of the decision. “My understanding is he is in quarters appropriate to his pay grade along with other personnel in full duty status.”

RELATED: Why Hasn’t Bowe Bergdahl Seen or Spoken to His Parents Since Release?

Fidell confirmed that Bergdahl has not yet been charged with any wrongdoing, but he would serve as his representation for any issues that do arise from the investigation. “My plan is to give him the kind of professional advice in cooperation with Army defense council that he is entitled to and represent his interests as best as I can,” he said.

Read the full report at thedailybeast.com.