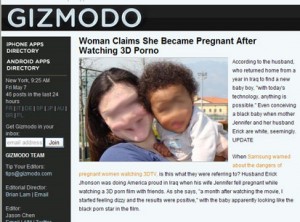 Yesterday we posted about a viral video clip of people walking on water that that a local news team mistook for being true. Today we’ve got another story to go in the “always check your sources” file. The Sensacionalista, a Brazilian satirical news site (think a low-scale Onion written in Portuguese), posted a story last week about an American woman who claimed she was impregnated by a 3D porn film. The quirky joke was soon being reported all over the internet as fact. And, this time, it wasn’t just some local affiliate news program that got duped; the popular tech site Gizmodo took the bait as well!

The original story was hilariously ridiculous. As the Sensacionalista “reported,” an American soldier named Erick Jhonson (the botched American name should have tipped someone off) returned from war to discover that his wife had given birth to a half black child. The only problem was, both he and his wife were white! When he confronted his wife, she claimed that she had been impregnated from watching a pornographic film shown in 3D. “Jhonson” was said to be suspicious of the story but not altogether unconvinced. The story includes a quote from him stating, “with today’s technology anything is possible.”

Funny, huh? Well, that jokey piece was soon translated to English and making its way from tech site to tech site, all the while being presented as a true story. Unfortunately, whoever translated it, didn’t also translate the Sensacionalista slogan: “the newspaper exempt from truth.” Soon enough, it ended up at the doorstop of Gizmodo, the technology blog owned by Gawker and famous recently for breaking the 4th generation iPhone story. Gizmodo passed the story along, much to the delight of the Sensacionalista who responded with this headline: “One of world’s largest online news publishes satire as if it were real.” Gizmodo quickly deleted the story, going so far as to clean out their online cache so no one could see it. All that is left are a few dead links on Google.

To make matters worse, the American tech blogs weren’t the only ones negatively affected by the mistake. The Sensacionalista is just a small website who took some random picture of a white woman with an interracial baby off the internet to accompany the story. As the story began picking up steam, The Brazilian site published this update (pardon the imperfect translation):

“A week ago we published an article about the woman who claimed to get pregnant after watching a porn movie 3d. The article was fake and we used the photo that we found on the Internet. Unfortunatelly, the article spread around the world because some sites thought that it was real. That was not our intention. Sensacionalista is a small site from Brazil. We never thought that this could happen. That’s why we are asking this family to accept our sincere apology. That woman and her baby in the photo had nothing to do with this article. They are just a normal family trying to live they’re own lives. We apologize for wrongfully taking their photo and putting it in our article. Please, not to publish this article again and next time check what you read before you write. This site is a humor site. Nothing here is real.”

We can only assume from reading this that the real woman pictured had been accused of cheating on her husband by people who recognized her from the photo. The Sensacionalista acted fast and removed the photo, presumably after being contacted by the woman, her family, or perhaps even her attorney.

The funniest part of the whole incident is the tone that most of these news articles took in reporting the story. Nearly every one insulted the “husband” for being stupid enough to believe such a ridiculous tale.

Now what is it they say about the pot calling the kettle black?

This article has been altered from its original form.