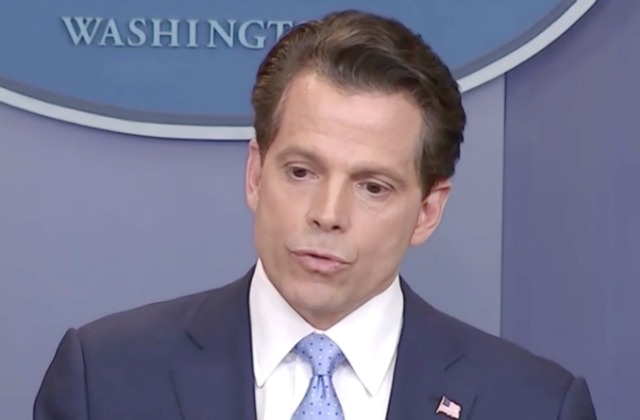 “The flame that burns twice as bright burns half as long.”  –Lao Tzu .

The New York Times is reporting that Anthony Scaramucci is out as White House Communications Director, after ostensibly serving in that role for roughly ten days in office. According to the report:

President Trump has decided to remove Anthony Scaramucci from his position as communications director, three people close to the decision said Monday, relieving him just days after Mr. Scaramucci unloaded a crude verbal tirade against other senior members of the president’s senior staff.

Mr. Scaramucci’s abrupt removal came just 10 days after the wealthy New York financier was brought on to the West Wing staff, a move that convulsed an already chaotic White House and led to the departures of Sean Spicer, the former press secretary, and Reince Priebus, the president’s first chief of staff.

JUST IN: White House: Scaramucci "felt it was best to give Chief of Staff John Kelly a clean slate." pic.twitter.com/k180lj4EDX

The timing of Scaramucci’s departure from this role coincides with the naming of General John Kelly — and former DHS Secretary under Trump — as the new White House Chief of Staff, which was announced last Friday. A career military officer, Kelly is known to be a strict follower of chains of command and discipline, and many wondered how Scaramucci’s role reporting directly to the President would fare under Kelly’s management style. (UPDATE: Reporting for CNN, Kaitlan Collins reported that in fact Scarmucci’s ouster of this role came as a result of General Kelly’s concern for his lack of discipline in this role.)

And the Times reported that it was indeed Kelly who made the call:

The decision to remove Mr. Scaramucci became public as Mr. Kelly, who replaced Mr. Priebus as the top adviser in the White House, began his first day in charge of the White House staff. He told aides gathered in early-morning staff meetings that he intended to impose a new sense of order and operational discipline that had been absent under his predecessor.

Mr. Scaramucci had boasted about reporting directly to the president, not the chief of staff. But the decision to remove him came at Mr. Kelly’s request, the people said.

Scaramucci was named White House Comms Director on Friday, Jul 21, a scant 10 days ago that were filled with numerous stories and distractions since he joined the White House in this new official role.  Scaramucci never actually officially started in this role, as he was scheduled to start in mid-August after he went through a vetting process. It’s not yet clear what new role he will play in the Trump administration moving forward, but sources tell Mediaite that he is not leaving the Trump Administration, just taking a different role.

But after just 10 days on the job, “The Mooch” (as he is known amongst his pals) went from being known as a “smooth operator” to being pushed out of the role that many lauded him for just a week and a half ago.

— Scaramucci opened by telling Politico  of his plans to fire assistant press secretary Michael Short. That apparently came as news to Short, who resigned before Scaramucci could actually fire him. Scaramucci blamed leakers for the sloppy firing, claiming it upset him “as a human being and as a Roman Catholic.”

– On Wednesday night, Scaramucci tweeted what many took as an accusation that Priebus had leaked his financial disclosure information (which, as it turned out, was already public). The Mooch deleted the tweet and denied he had accused Priebus, despite including his Twitter handle in the message.

— Thursday morning, Scaramucci called into CNN’s New Day, riffing to Chris Cuomo for 30 minutes about killing leakers, comparing his relationship with Priebus to the biblical feud between Cain and Abel — which ended when Cain bludgeoned Abel to death.

— On Thursday afternoon, The New Yorker‘s Ryan Lizza published a bonkers piece detailing his conversation with the furious comms director from Wednesday night. Over the course of the call, the Mooch referred to himself in the third person, demanded Lizza reveal his source, called Priebus a “fucking paranoid schizophrenic,” threatened to fire the entire communications staff, and at one point declared: “I’m not Steve Bannon, I’m not trying to suck my own cock.”

— Shortly thereafter, Scaramucci took to Twitter to note: “I sometimes use colorful language” and “I will refrain in this arena.” In a subsequent tweet, Scaramucci put an end to his short-lived romance with the press, claiming: “I made a mistake in trusting in a reporter. It won’t happen again.”

This series of mistakes led some commentators to prepare for the certain demise of Anthony Scaramucci. In a previous White House, just one of those flubs would be enough to send Josh Earnest back to Kansas. It was reported by Axios  Friday morning that President Trump “loved” Scaramucci’s shockingly unprofessional comments. What’s more, many have reported the president was actively cheerleading the savaging of Priebus. And given Trump’s intense disdain for leaks, Scaramucci just might be winning him over with his “kill all the leakers” jihad.

(Additional reporting in this was provided by Aidan McLaughlin)