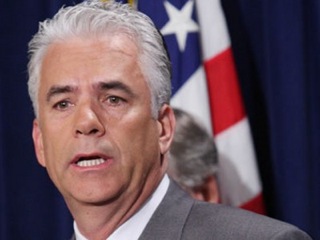 Congressional publication Roll Call is reporting that Sen. John Ensign is planning on resigning tomorrow. Sen. Ensign is an embattled Nevada Republican best known for carrying on an affair with the wife of his former top aide, an affair which indirectly resulted in Sen. Ensign’s parents paying said wife a sum of money.

Ensign had already announced in March that he would be retiring from the Senate, noting that a run for reelection in 2012 would result in an “exceptionally ugly” campaign against him, and that “there are consequences to sin.” He is, however, expected to step down and allow for Nevada governor Brian Sandoval to appoint someone to replace him, rather than waiting for his term to end.

Update: Sen. Ensign has released an official statement negating rumors that he will leave office tomorrow. Instead, the statement notes that Ensign has already handed in his resignation to Vice President Joe Biden, and that it will be effective beginning May 3. The full statement below:

Washington, D.C. – Senator John Ensign today announced his resignation as the 24th United States Senator from the state of Nevada. In a letter to Vice President Joe Biden tomorrow, Senator Ensign will state that his resignation from office is effective as of May 3, 2011.

“It is with tremendous sadness that I officially hand over the Senate seat that I have held for eleven years,” said Ensign. “The turbulence of these last few years is greatly surpassed by the incredible privilege that I feel to have been entrusted to serve the people of Nevada. I can honestly say that being a United States Senator has been the honor of my life.

“I know that my staff has been devoted to helping those in our state when they needed our assistance the most, and I hope that this will be the enduring legacy that we leave behind. As I close the door to this chapter of my life, I am left with memories that I will forever treasure. Traveling across our state during the years, I have heard incredible stories of strength, of struggle, and of compassion. I have met people who have forever changed me, and I can say that I will go through life a better person because of the struggle that I have been through and the support that I have received.

“While I stand behind my firm belief that I have not violated any law, rule, or standard of conduct of the Senate, and I have fought to prove this publicly, I will not continue to subject my family, my constituents, or the Senate to any further rounds of investigation, depositions, drawn out proceedings, or especially public hearings. For my family and me, this continued personal cost is simply too great.

“I am gratified that, after extended investigations, both the Department of Justice and the Federal Election Commission saw no grounds on which to charge me with improper conduct. I was hopeful that, with the closure of these investigations against me the wear and tear on my family and me would soon be over. This was not the case.

“As is its right, the Senate Ethics Committee is continuing its investigation of issues into which it has been inquiring for the past year and a half. Indeed, the Committee even decided recently to devote more resources to its investigation by hiring an outside counsel even though the issues have been viewed and reviewed by so many others.

“I came to office with the pledge to make this country a better place, but that pledge does not end with my resignation. I will continue to fight for a better country and for a future that our children deserve. I cannot fully express what serving the people of Nevada has meant to me, but I will try to repay them for their trust for the rest of my life.