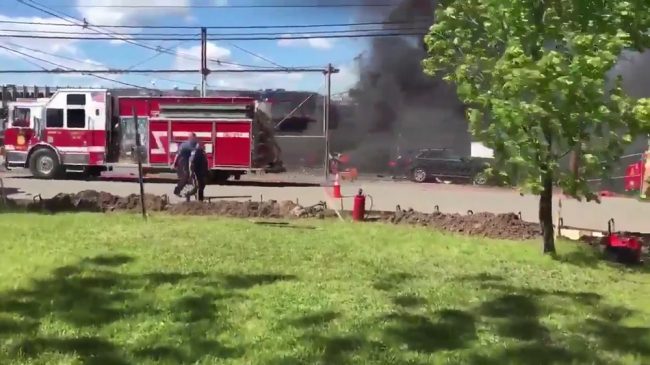 The jet wasn’t carrying any passengers, though the two crew members on board died in the crash. The resulting explosion caused multiple cars and nearby buildings to catch fire, and NBC states that Teterboro Airport was closed shortly after the incident.

The FAA has already issued a statement on the crash:

Preliminary information from the FAA: Learjet 35 crashed on landing at Teterboro. (via @prodjay) https://t.co/cQdBZdbDq2

MORE: FAA: A Learjet 35 coming in from Philadelphia crashed on approach to runway at Teterboro Airport; FAA is enroute to the scene. pic.twitter.com/VP9lwUdLW3

The airport issued a ground stop in the immediate aftermath of the crash, according a Tweet by ABC’s Dan Linden.

Steve Case, the co-founder of AOL, posted an Instagram photo of the smoke rising in the distance.

Other Twitter users posted their own photos and footage of the crash:

@NJerzyFireAlert Siting on runway. Please pray for these people pic.twitter.com/1haw0VVCq1