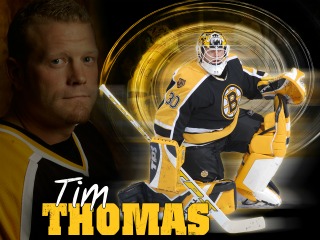 Boston Bruins goalie and playoff MVP Tim Thomas elected not to join his teammates at the White House Monday.

Thomas explained his decision on his Facebook page, clarifying that it wasn’t about “politics or party,” but, rather, had to do with his general dissatisfaction with the manner in which the Federal government is being run:

I believe the Federal government has grown out of control, threatening the Rights, Liberties, and Property of the People.

This is being done at the Executive, Legislative, and Judicial level. This is in direct opposition to the Constitution and the Founding Fathers vision for the Federal government.

Because I believe this, today I exercised my right as a Free Citizen, and did not visit the White House. This was not about politics or party, as in my opinion both parties are responsible for the situation we are in as a country. This was about a choice I had to make as an INDIVIDUAL.

This is the only public statement I will be making on this topic. TT

The White House has not responded directly to Thomas, but President Barack Obama did make sure to mention the player’s contributions during yesterday’s White House celebration. “This Stanley Cup,” he said, “was won by defense as much as by offense. Tim Thomas posted two shutouts in the Stanley Cup Finals and set an all-time record for saves in the postseason, and he also earned the honor being only the second American ever to be recognized as the Stanley Cup playoffs MVP.”

Yahoo Sports also notes that Thomas has always been politically minded — in fact, he’s “long been a fan of former Fox News channel host Glenn Beck, once saying he aspired to appear on Beck’s talk show as a guest.”

Thomas’ move has inspired its fair share of support and criticism. The Boston edition of Barstool Sports wrote that Thomas “decided to play a little GOP hooky and interject politics into an apolitical event when he refused to join his fellow Stanley Cup-winning teammates at the White House,” adding that his decision “reeks of pettiness.” Meanwhile, Boston Globe writer Kevin Dupont wrote that Thomas’ actions were “Shabby. Immature. Unprofessional. Self-centered. Bush league. Need I go on?”

But Yahoo’s Greg Wyshynski noted that visiting the White House is, in itself, already immersed in the political. “Good on Thomas,” he wrote, “for using this moment — where a professional sports team participates in what’s both an honor for its accomplishments and a political photo opportunity — to make a political statement of his own.”

Boston-based radio duo Dennis & Callahan called Thomas a “polarizing figure” now, who could formerly “do no wrong.” They also guessed he’d garner boos next time he’s on the ice. Have a listen: