Bryan Fischer: Obama ‘Ignorant About Homosexuality’ Because ‘Gays Have No Right To Sodomy’
video

Bryan Fischer: Obama ‘Ignorant About Homosexuality’ Because ‘Gays Have No Right To Sodomy’ 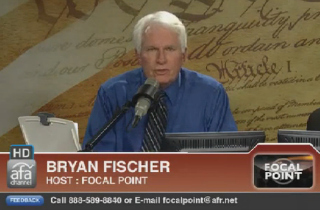 One day after President Obama became the first president to mention gay rights in an inaugural speech, Christian conservative radio host Bryan Fischer blasted the president for his “ignorance of homosexuality” because, as Fischer believes, “gays do not have the right to engage in sodomy.”

After praising the American people as “resilient” and noting that the second inauguration of Obama means “we are halfway there,” Fischer went off on Obama’s specific quote that “Our journey is not complete until our gay brothers and sisters are treated like anyone else under the law. For if we are truly created equal, then surely the love we commit to one another must be equal as well.”

Fischer then explained that sodomy was a felony for the first 200 years of America’s history, “so it’s absurd in the extreme, it’s ridiculous, it’s ludicrous for homosexuals to claim that they have some kind of constitutional right to engage in sexually deviant behavior. They don’t.”