By Escaping Trump’s Wrath, John Kasich Appears to Be His #1 VP Choice, But There’s a Big Catch
Opinion

By Escaping Trump’s Wrath, John Kasich Appears to Be His #1 VP Choice, But There’s a Big Catch 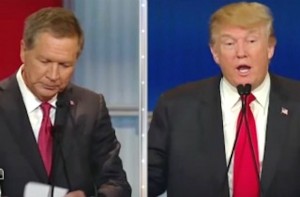 In a presidential primary race full of sensationalism, cynical soundbites and fleeting sanity, a sane voice has quietly endured in the form of John Kasich.

No, he isn’t sexy. No, he isn’t smooth. And no, he doesn’t get much airtime when relatively stacked up against other candidates, especially the frontrunner. His interviews are almost always a methodical history review than splashy oratory, primarily focusing on his achievements around balanced budgets on the federal and state level, lowering taxes, creating jobs and allocating resources to the mentally ill and drug addicted. To the media’s dismay, he almost never attacks other candidates, Democratic or Republican alike. Instead, he proudly runs on compromise both here at home and abroad when that’s a big no-no in our hopelessly polarized climate. But most importantly – or so it would seem — when stacked up against Hillary Clinton in a general election, no candidate trounces her the way he does:

We either want to beat Hillary Clinton and take back the White House … or we don't.

He has almost no shot of winning the nomination.

Right candidate, wrong time. The feeling here is Kasich (with his current record) would best John McCain for the nomination in 2008. He would have done the same over Mitt Romney in 2012. But that was a different time… a time before this explosion of anger at Washington from Republicans and a good chunk of Democrats alike (See: Sanders, Bernie; grassroots) fully came to fruition. All of that said, Kasich remains the third-most important figure in the race on both sides right now. Why? Because whomever the GOP frontrunner ends up being (Trump very likely, Rubio a distant maybe, Cruz not likely), he would be insane not to make Kasich his #2. Insane. But if Trump asked and Kasich agreed (not a guarantee), running as his VP would be — without question — the hardest white collar job in the world.

So why is the feeling here that Trump would even look at a Kasich or any politician in an environment when outsiders have thrived? Simply go back to a Trump interview with Greta Van Susteren last week when the host nailed down a general specificity (a new term I’ve invented for Trump) on whether his running mate would be a politician or not.

VAN SUSTEREN: If you are the nominee, what is your criteria for vice president?

TRUMP: Somebody that can be a great president. You know, it’s really a simple criteria.

VAN SUSTEREN: Do you have any names?

TRUMP: I do. I have names in mind, but I don’t want to think about it. I have to get there.

VAN SUSTEREN: Somebody in politics or would you go out to politics?

TRUMP: I can’t believe that I’m sort of a politician now, but one day it was going to happen.

Easy process of deduction from here in terms of who Trump’s politician would be:

– Cruz: Way too much bad blood, the Cruz brand is damaged and Texas is already a red state, so he’s out
– Rubio: Likely a second choice for VP as Florida is important, but still lacks the gravitas and experience an evergreen Trump would need
– Carson? A good surgeon general pick, but doesn’t possess foreign policy acumen or fiscal depth to be seen as a comfortable heartbeat-away-from-the-presidency selection
– Jeb!: (See: Cruz, Ted; bad blood)
– Christie: That uneasy feeling another shoe could drop in Bridgegate makes him seem too risky
– Kasich: 62 percent approval in Ohio, a state that went to Obama twice. Federal budget experience/success a huge plus. Someone who can work with Democrats/make good deals (which plays better in the general than a GOP primary). Only GOP candidate generally in line with Trump on healthcare. Proves one of Trump’s main talking points about putting the best/smartest people in charge

Again, a good argument can be made for Rubio… but he doesn’t come close to bringing what Kasich does for Trump. And as you may have heard, no president has ever won office without taking Ohio since John Kennedy.

Still… that doesn’t mean all the cable news networks shouldn’t make sure they have the theme from The Odd Couple in their bump playlist. Because as mentioned earlier, Kasich’s #1 rule appears to be pushing a positive message around experience and achievement without tearing an opponent down, and a Trump-Kasich ticket would obviously therefore be a constant contradiction of strategy/tone. And as sure as you were born, it is guaranteed Kasich’s role would be a dual one: part-VP candidate, part press secretary being asked to answer for every Trump tweet, every Trump ill-advised, unfiltered utterance.

Big questions: Does Trump have the discipline to rebrand himself in the general election upon receiving the nomination? Can he put down his Twitter app for even five minutes? Can he just shut off what has been so effective for him throughout primary season in his unlikely rise to the top of the GOP? Probably not. So if Kasich accepts (again, a yuge if), he would be wise to have a long, long conversation around Twitter control and acting less petulant and more presidential. Americans are very forgiving people. A good chunk are also A.D.D. (attention deficit disorder). If Trump was smart enough to rebrand himself into something more resembling the tough-but-relatively-reserved respected figure out of The Apprentice, his persona – especially when adding in a Kasich – of this primary season may be softened enough to make a difference.

One more scenario to consider: The establishment powers that be in the GOP are obviously rooting for an improbable Rubio surge at this point. The polls say otherwise, as Trump appears to be headed for a big win in Nevada this week and a Super Tuesday triumph on March 1. So don’t be incredibly shocked if Rubio and Kasich announce some kind of alliance — an establishment dream ticket — before Trump can even ask Kasich to join him (as Lindsey Graham proposed today on Rita Cosby’s WABC radio show). In other elections, this occurrence would be considered fantasy. In this election season? Par for the course.

John Kasich has run an admirable campaign. But while that second place finish in New Hampshire was somewhat of a moral victory given all the time he put in there, there doesn’t appear to be a path to the nomination. That leaves a likely VP spot for the likely nominee in Donald Trump.

Being that close to the presidency is too much for anyone to pass up. The only question is: Unless Trump puts away the nonsense, does an affable Ohio Governor really want to play a press secretary on the defensive every moment after being chosen all the way until November, and perhaps beyond?