By Historical Politifact Findings, the Winning Candidates Should Be…

By Historical Politifact Findings, the Winning Candidates Should Be… 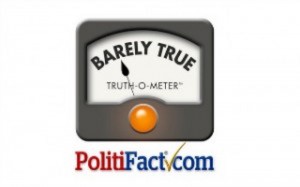 For nearly the last decade, Politifact has served as the one-stop source to gauge the accuracy of statements made by elected officials, cable news pundits, and members of the media. Politifact offers a grade ranging from ‘True’ to ‘Pants on Fire’ false to verify, and always offers detailed explanations as to their research.

I turned to the history log of Politifact on each of the candidates running for the Presidency in 2016 to get a gauge for myself on how their statements historically have stacked up. I found some surprises, and drew for myself the conclusion — based solely on years of Politifact grades — the two candidates who should be heading towards the general election, based on veracity alone.

First, let’s start with a question: if I told you that two of the GOP candidates in the 2016 field have never registered a ‘True’ statement on Politifact, who would you guess?

You’re exactly right! Donald Trump and Ben Carson are terrible at this game. Let’s dig in a bit on Trump. Politifact has examined 52 total statements from the business magnate, 63% of which are either ‘False’ or ‘Pants on Fire’. My personal favorites are his claims that we may have as high as 42% unemployment and that the people who went to school with President Obama, “never saw him and they don’t know who he is”. OK Trump; even his ‘Mostly True’ statements are about his fellow GOP candidates and not about policy, and one statement regarding parents who spank their kids. Donald Trump is currently dominating all GOP nomination polls.

To Ben Carson’s credit, Politifact has only examined 12 of his statements; they ranked his famous “go into prison straight, come out gay” zinger as ‘False’, and quoted a professional who called Carson’s assertion “insane”.

Let’s move along, shall we? I had higher hopes for Ted Cruz heading into my research; only one statement out of fifty seven has been deemed ‘True’ from the Texas Senator. For the insatiably curious, I am proud to present Cruz’s singular honest statement: “We have a federal government that thinks they have the authority to regulate our toilet seats”. Cruz for the win.

Marco Rubio and Rand Paul have both made a sport of going after Obamacare in the past few years, though unfortunately, the majority of these statements wind up in the ‘Pants on Fire’ pile.

Louisiana Governor Bobby Jindal to me is the unicorn in this equation; although only 9 statements of his have been critiqued by Politifact, he consistently ranks among the top in regards to accuracy. His only ‘False’ statement is “I’m predicting (the Saints) will go not only undefeated, but all the way through the Super Bowl — something that’s never been done before”. Although the ’72 Dolphins achieved a perfect 17-0 season, presumably, Jindal was addressing the current format of going 19-0, which correctly, has never been achieved.

In other words, aside from a sport prediction (that’s only wrong on technicality), Bobby Jindal seems to be our modern Honest Abe.

I found myself disappointed with the Politifact history on Bernie Sanders; for some reason I was expecting the vibrant socialist to never have said an incorrect thing. Out of his 30 examined statements, 27% rank ‘False’ or ‘Mostly False’ (his pants remain safely unburned, however). Most of these falsehoods though stem from slightly nuanced language that has been proven incorrect on technicality. For instance, the claim “We now work the longest hours of any people around the world” was based on slightly antiquated data; although it was certainly true at the end of the 1990s, it didn’t hold up when Sanders said it in 2011, and he got dinged in the Politifact landscape.

Otherwise, advocates of The Bern can take refuge knowing that the base of his talking points register as true. These include facts about income and wealth inequality, the Walton family of Walmart owning more wealth than the bottom 40 percent of America, and “the top 1 percent of all income earners in the United States made 23.5 percent of all income,” in 2007. These make up the very essence of his underdog, anti-capitalist campaign.

Ah, now on to Jeb Bush. The far left will decry my assertion and the figures associated with Politifact as skewed, but the facts seem to indicate what I’ve long suspected: Bush is remarkably reasonable.

Out of 59 Bush statements written about by Politifact, 55% of them register as ‘True’ or ‘Mostly True’. These include: “[In Florida] We reduced the government workforce by 13,000, 11 percent, during my eight years” (you may disagree with his personal decisions, but his math is accurate) and “In 1998, nearly half of Florida’s fourth-graders were functionally illiterate. Today, 72% of them can read”. Politifact further notes, “Reading test scores have improved dramatically” to support this claim.

However, Bush does have 14 ‘Mostly False’ statements to his name, and that’s what separates him from my choice as the presumed Politifact candidate best suited to represent the GOP. If this research is to be believed, then on Tuesday November 8, 2016, we’ll be heading to polls to decide the winner between:

It seems like the minds at Politifact have been incredibly scrupulous covering Hillary Clinton statements, weighing in on 125 of them. Clinton rings ‘True’ on 38 claims, the highest percentage for any candidate in the race, and the far majority fall under ‘True’, ‘Mostly True’, and ‘Half True’. Her representative graph is here:

Clinton’s pantsuit only catches fire in regards to two claims (according to Politifact): a barb at Obama in 2008 debates, and the assertion of “landing under sniper fire in Bosnia 1996”, which was in reality just a calm walk on the tarmac. This figure may rise.

But the real winner of my study is Kasich, still seemingly a long-shot in this crowded GOP field, but whose history of claims under Politifact is incredibly impressive. 54 of his claims have been poked and prodded, and his results are below:

Simply by the visuals of the results (that is, if Politifact’s work on honesty is king), you could conclude that Clinton v. Kasich would be the most ideal competition for the 2016 race. One of Kasich’s ‘Pants on Fire’ quotes is simply a misattributed quote to Lincoln.

His claims that “Ohio wages have increased by $10.3 billion,” agriculture being “the strongest industry in Ohio,” and identifying the 77 job training programs in his home state are all true.

If you listen to John Kasich speak in the debates, he is fair, firm, and knows what he’s talking about; my peer Joe Concha noted that Kasich is the only candidate with a proven commitment to furthering the mental health dialogue that invariably happens after mass shootings. The problem is that Kasich continues to be drowned out by the clown car GOP race; in any other election cycle, his executive experience would propel him to the top of the class. Even in his home state, Kasich currently trails both Trump and Carson.

Of course there is no real historical context that argues candidates of honesty earn their party’s nomination. But it’s fun to look at a different side of the rhetoric and parse these candidates accordingly. And in doing so, there you have it: a Clinton-Kasich race should be in our futures if the investigations of Politifact have any bearing. Then again, that’s why they run the race; they each have a long way to go if they want to match the numbers of the man whose job they’re chasing. Obama has had 567 statements examined by Politifact, 75% of which fall into the top half of veracity. His ‘Pants on Fire’ number? 9 in total — the same number as Trump.