Candidates Now Running Scared From Press For Fear Of Embarrassment 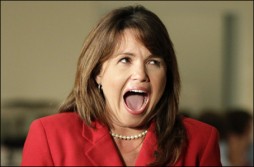 Has this election season become a lot of sound and fury signifying disappearing candidates? That’s what Politico is reporting. Apparently a lot of politicians up for election next month are running scared of the media for fear of being caught on tape saying something stupid.

With a month left until the midterm elections, there is something noticeably absent from some key statewide races: the candidates…The lengths to which some of the hopefuls have gone — such as refusing to release public schedules to local reporters — have astounded veteran political observers and sparked a debate over whether the year of the missing candidate marks a new era in which statewide contenders will be as guarded as presidential aspirants.

So rather than present the opportunity for an encounter that might later surface in an opponent’s TV ad, the candidates prefer to risk an image of them fleeing cameras and shouted questions as protective aides whisk them into the safety of a waiting car.

Politico says it’s primarily a GOP phenomenon and uses Christine O’Donnell (who famously canceled all her Sunday show appearances after Bill Maher aired the ‘witchcraft’ clip), Colorado’s Ken Buck, Sharron Angle (Harry Reid gets the nod here, too), and Wisconsin’s Ron Johnson. In the era of citizen journos and viral clips it’s not totally shocking that some pols might want to avoid attention. It’s also interesting to note that many candidates feel they can get away with it because “they’re not going to get dinged by the public for avoiding the press because the public believes the press is playing a gotcha game.” Essentially they are playing by Tea Party rules under which any sort of so-called rogue behavior is rewarded.

That said, avoiding the press for fear of making a gaffe is an interesting strategy in a year of candidates whose entire campaigns appear to be predicated on embracing certain level of outrageous behavior. Again, Christine O’Donnell who released an ad today which began with her declaring ‘she is not a witch’ and Carl Paladino who last week verbally threatened a reporter. In fact, the entire political persona of Sarah Palin, on whose support many of these campaigns are depending, appears to be one long appropriation of the caricature created for her back in 2008 by Tina Fey. Perhaps not everyone is up for that sort of campaigning, and more importantly, it has yet to prove a success at the polls.