1/4 Wouldn't Vote For Ben Carson Because of His Religion

Careful, Ben Carson: 1/4 of Americans Wouldn’t Vote for You Because of Your Religion 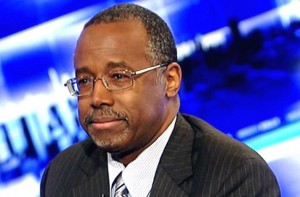 After Ben Carson said on NBC’s Meet the Press that a Muslim should never be president, perhaps its worth noting that a huge chunk of the American public say they would never vote for him because of his religion.

Carson is an evangelical Christian who first burst onto the political scene with a speech at the White House Prayer Breakfast. The most recent Gallup poll found that 25% of Americans say they would never vote for an Evangelical presidential candidate. The only more hated religious groups were Muslims (38%) and atheists (40%).

Anti-evangelical sentiment is strongest in the Democratic Party, where a third of voters said they’d never vote for one (sorry, Jimmy Carter). But even in the Republican Party, only 86% of voters say they could ever support an evangelical. In a primary race where literally dozens of votes can change the entire race, religious bigotry alone could conceivably knock him out of contention.

To put things in perspective; for all the handwringing about racism and sexism during the 2012 election, Evangelicals are three times more likely to be openly discriminated against in presidential politics than women or blacks. Even gay and lesbian candidates have slightly less people saying they’d never vote for them (24%).

And it’s worth noting that it wasn’t that long ago that Carson’s denomination, the Seventh Day Adventist Church, would have made even other Evangelicals uneasy. To this day, there are a handful who will forcefully argue that the Adventists — who historically disagree with several mainstream Christian beliefs, believe the Catholic Church is the Antichrist, and have a penchant for predicting the end of world — are a “cult” or non-Christian. But like Protestant anti-Catholicism and anti-Mormonism, those sentiments mostly died out during the culture wars of the ’80s.

And yes, it’s also worth noting that it wasn’t that long ago that Carson would have faced substantial opposition on the sole basis of his race.

All of which is just a long-winded way of saying that when it comes to disqualifying candidates based on their religion, Carson shouldn’t just be tolerant because it’s the right thing to do (which it is). His own electoral hopes may rely on the American people looking past each other’s differences.