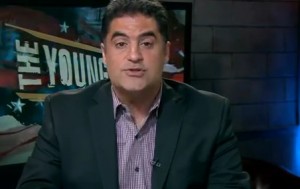 On the web-only edition of Tuesday’s The Young Turks, host Cenk Uygur weighed in on the controversy surrounding Chris Hayes‘ Memorial Day weekend remarks about the word “heroes,” and Hayes’ subsequent apology. “Agree or disagree,” Cenk said, “it’s an interesting point” that Hayes was trying to make, but he found the subsequent outrage ironic, blasted Donnie Deutsch for calling Hayes a “weenie,” and cast Hayes’ apology as MSNBC “back(ing) down.”

Cenk played a clip of Hayes’ remarks, then said, “Agree or disagree, it’s a really interesting point about the priorities we have in this country. What happens next, of course, is irony.”

“Everyone,” he continued, “attacks Chris Hayes for daring…’How dare you possibly suggest that? You have to bow your head, call everyone in the military heroes, because war is awesome, the Pentagon is the greatest, our soldiers are all heavenly.'”

He went on to observe that the broader point about how we treat war “is a really interesting and intelligent conversation, but not the kind of conversation we have in the United States.”

After blasting Deutsch, Cenk said “Of course, MSNBC has to back down. Here comes Chris Hayes with an apology.”

While I agree that Hayes’ underlying point was an interesting one, his focus on the word “heroes” as a jumping-off point was unfortunate, and I think Hayes’ apology was directed at those who might have legitimately been offended, notwithstanding Hayes’ repeated attempts to clarify his thought during the show. For that reason, Hayes was right to apologize.

However, I don’t accept the premise, embedded in that apology, that you can’t have tough conversations about war if you haven’t served in the military during wartime. As Cenk points out, it is that kind of mindless devotion to militarism that results in disasters like the Iraq War, which was, itself, promoted and cheerled by a cadre of people who never wore the uniform.

If Hayes’ “heroes” comments (which, removed from context, did give me a wince) were truly offensive, then Mitt Romney’s decision to demonstrate in favor of the Vietnam-era draft, in favor of sending other people’s children to die while he avoided service by doing Mormon door-knocks in France, was unforgivable. When he finally did oppose the war, it was as a political blunder, not on the basis of the war’s human cost.

Why does one elicit outrage, and the other not, from those who revere our fighting men and women? That’s something for the marketplace of ideas to work out, and that’s really the point.

It was big of Hayes to apologize, and right, but it is important to keep sight of the fact that the rights our military stands for, our country stands for, are made possible by the very first of them. Freedom of speech is not just The Law Of The Land, it’s an idea, and any attempt to chill that idea should be resisted. What got Chris Hayes in trouble was his tendency (and his show’s) to speak freely, but there are elements of his apology that make it sound as if he’s surrendering the right to do that. In my view, that would be the greater offense.