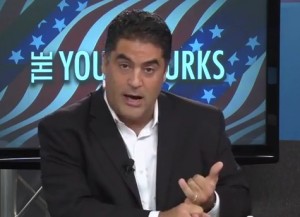 Young Turks host Cenk Uygur, soon to join CurrentTV as Keith Olbermann‘s lead-in, lit into freshly-minted CNN OutFront host Erin Burnett over what he saw as a smug, fact-challenged segment ridiculing the Occupy Wall Street protest. Uygur delivered a blistering critique of Burnett on The Young Turks this week. When I asked him about the media’s coverage of the protests, he had praise for some, but slammed Fox News, and called much of the mainstream media’s reporting on this “abhorrent.”

Uygur tore into Burnett over her Occupy Wall Street segment, in which she uses her finely-honed financial acumen to completely pwn some unemployed loser by pointing out that “taxpayers actually made money on the wall street bailout.”

Cenk points out that Burnett is not only missing the point of the Occupy Wall Street protest (there’s nothing in here about a failure to pay back almost-free loans), but that her facts are, at best, incomplete, and her dismissive attitude is symptomatic of an incestuous business reporting culture:

The fact is, as Uygur points out, taxpayers actually didn’t “make money on the Wall Street bailout,” because the government overpaid these banks by $30 billion for garbage AIG securities in the “Backdoor Bailout” he describes. Well, at least the banks paid back the taxpayers for the TARP bailouts…by borrowing money from the taxpayers.

In the meantime, as the Declaration of Occupation points out, they used our money to make billions, pay themselves huge bonuses, and continue to influence elections and policy, and heap extra fees on those same taxpayers. A cynical person might call that some kind of warfare. In fairness to Burnett, though, she has come a long way from urging consumers to be careful about wishing for non-poisonous toys, and from what I’m told, has done some tough interviews with Tim Geithner, Leon Panetta, and Jon Huntsman this week.

I asked Cenk what he thought of how the Occupy Wall Street protests are being covered by the rest of the media. He called Fox News’ coverage ” comically bad,” and “the usual propaganda nonsense they spew forth on a regular basis.”

“No one leaps to the defense of the big banks like Fox News,” Cenk told me, adding, “The really funny part is when they pretend to be populist, when in reality they are the biggest elitist protector of the rich and powerful. That whole network is one giant joke.”

Fox News has even come under fire for coverage that it didn’t air, such as this interview with a protester that didn’t make it onto On The Record (along with over an hour of other footage that didn’t make the two minute segment). “Fox News covered up reasonable points that didn’t suit the interests of the Republican Party and the super rich?” Cenk said. “Shocking! Shocking!”

As for the rest of the media, the protests are starting to catch on. Cenk had praise for some more progressive-leaning journalists. “I think it’s getting more coverage now, so that’s positive. I think Keith Olbermann has led that effort and has done a fantastic job of covering the protests. Dylan Ratigan went down there a couple of times and he went early on, that’s positive.” (MSNBC’s Ed Schultz also did an entire live show from the protests earlier this week.)

Many mainstream newsers, according to Uygur, just aren’t getting it, though. “For a great majority of the time, the media coverage was abhorrent,” he says. “The disdain drips off the lips of the millionaire news anchors. Why won’t the protesters just east cake?!”

Uygur, like several leading progressive figures, has a unique perspective, because he used to be a conservative. However, he doesn’t see OWS through that lens. “This is not a liberal or conservative issue,” he says. “All of the American people have been ripped off by Wall Street and the politicians they have bought. Conservatives should be the most mad at the government interfering with the free market to give the big banks enormous, artificial advantages. I thought the Tea Party was against the bailouts. Where are their protests on Wall Street? Curious how they haven’t had any, right?”

I asked Cenk why he thought this movement was being covered so dismissively, while the Tea Party has been consistently legitimized by the media. “So far, unfortunately, the Tea party has not been a real threat to the establishment,” he replied. “They are in a contest with mainstream Republicans as to who can cut the taxes of the very rich even more. Wow, the establishment must be shaking in their boots.”

“Occupy Wall Street is a real threat. These are people who are not going to easily get misdirected into helping the banks. They’re here to assert the voice of the majority of the people and there is nothing a corrupt establishment hates more than that.”