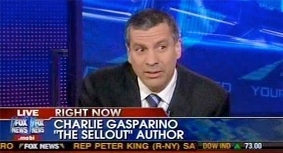 Charlie Gasparino, a star reporter at CNBC, will be leaving the network and joining Fox Business Network, according to TVNewser.

It’s a big pick-up by the still new FBN, and as the network adds new pieces to its line-up which sometimes feel tangential to its core principles, this one is decidedly business-related.

Gasparino hasn’t been on CNBC much recently, last appearing on the network in December 2009 (according to TV Eyes) and has been promoting his book, The Sellout in various forms of media. He even promoted it on FNC in November.

This is a significant acquisition by FBN, and not just because it’s a steal from the business news industry leader CNBC (in the same way that Liz Claman was when the network first launched in late 2007). The big names FBN has has brought in recently are Don Imus and John Stossel. Although they are TV stars, they are not seen as “business” personalities or hosts. Gasparino, on the other hand, is an ear-to-the-ground business reporter who has been in the industry for years, but also, as seen from his book, holds Wall Street accountable in very strong ways.

Will it bring in the viewers FBN desperately wants? Possibly. But it does something for the network that Imus and Stossel can’t do – brings street cred. Both Wall Street and Main Street.

An official announcement is expected this week, and we’ll have more details as the week goes on.