Cheerleader Who Sued Parents for Tuition Forced to Move Back Home 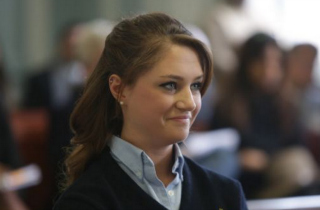 Which makes the parents of Rachel Canning, the cheerleader who sued her parents for money, exemplars of parenting: their lawyer announced that the 18-year-old was willingly moving back into her parents’ house. This, after a judge refused to award Canning any of the things she demanded (private school and college tuition, child support, and her attorney’s fees)? This is the most awkward homecoming ever!

Prior to that, she was staying at her best friend’s house, and during the trial, Sean and Elizabeth Canning claimed that their daughter Rachel was being badly influenced by said friend and her father, state politician John Inglesino. Said bad influences included: allowing a 15-year-old Rachel to drink alcohol in their home to the point of puking, and also encouraging her to sue her parents. (You know, as best friends’ parents do.)

According to the Cannings’ lawyer, Rachel’s homecoming “is not contingent on any financial and/or other considerations,” which, seriously? Rachel’s legal fees probably cost more than her college tuition at this point, and her parents are just letting her live with them rent-free?! Even college grads have to pay rent to their parents if they’re living in their basement, and this girl publicly accused her parents of abuse?!

Okay, perhaps we’re belaboring the point. Let’s get back to the funny part of this entire story, which is this child is moving back in with the parents she sued. On second thought, we’re not sure if the parents are exemplars, or enabling her behavior. (RENT-FREE?!)