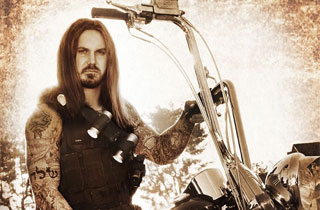 Tim Lambesis, the frontman for a popular Christian metal group who was recently convicted of attempting to murder his wife, admitted in an interview that not only was he actually atheist, his entire band was, too — and they hid that fact in order to keep selling music to their fans.

The fact was initially revealed by his wife in divorce papers, and in an interview with Alternative Press shortly before his conviction, Lambesis, the lead singer of As I Lay Dying, said that he’d become an atheist after completing a religious studies course online. “I’d get three pages of the traditional evangelical conservative point of view, then three paragraphs or sometimes even just three sentences from the atheist perspective,” he said. “But even in just a few sentences, I’d think, ‘This point of view makes more sense,’ even when it wasn’t being well represented. In the process of trying to defend my faith, I started thinking the other point of view was the stronger one.”

“I actually wasn’t the first guy in As I Lay Dying to stop being a Christian,” he added. “In fact, I think I was the third. The two who remained kind of stopped talking about it, and then I’m pretty sure they dropped it, too.”

It soon became a problem when As I Lay Dying fans began accusing Lambesis of promoting Satanism in a side project, when in fact he was attempting to “[come] to grips with the idea that life has no purpose, no meaning. These were negative themes I wasn’t ‘allowed’ to deal with in As I Lay Dying songs.” He added that he was afraid to disrupt his income stream: “My plan was to tour for as many really good years that we actually had left…I wanted to save up that money and then stop doing it altogether, stay home with my kids, have the money we needed.”

He also admitted that he drew on his newfound atheism to justify increasingly destructive behavior, though he regrets it now:

The first time I cheated on my wife, my interpretation of morality was now convenient for me. I felt less guilty if I decided, “Well, marriage isn’t a real thing, because Christianity isn’t real. God isn’t real. Therefore, marriage is just a stupid piece of paper with the government.” I thought of myself as super-scholarly at the time. “My academic pursuit has led me to this.” I was sincere to a certain degree, but we all hear what we want to hear to justify our actions. I interpreted the evidence how I wanted and felt it was intellectually dishonest to consider myself a Christian. I felt at best I could consider myself agnostic, and at least I would consider myself an atheist.

Eventually, he and his wife divorced, and months later he was arrested in a sting operation for attempting to hire a hitman to kill his ex-wife. In March of this year, he was sentenced to six years in prison for attempted murder.

In a surprising coda, Lambesis revealed the truth about the majority of popular Christian bands:

We toured with more “Christian bands” who actually aren’t Christians than bands that are. In 12 years of touring with As I Lay Dying, I would say maybe one in 10 Christian bands we toured with were actually Christian bands. I actually wasn’t the first guy in As I Lay Dying to stop being a Christian. In fact, I think I was the third. The two who remained kind of stopped talking about it, and then I’m pretty sure they dropped it, too. We talked about whether to keep taking money from the “Christian market.” We had this bizarrely “noble” thing, like, “Well, we’re not passing along any bad ideas. We’re just singing about real life stuff. Those kids need to hear about real life, because they live in a bubble.”