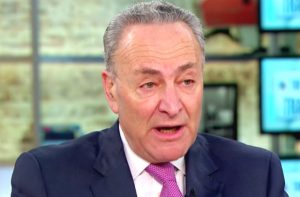 Democratic Senate Minority Leader Chuck Schumer flip-flopped Tuesday on his flip-flop on whether the Senate should filibuster and obstruct the president’s Supreme Court nominees.

In 2007, the New York Senator said that the Democratic majority should block any of President George W. Bush’s remaining Supreme Court nominations. “”We should reverse the presumption of confirmation… we should not confirm any Bush nominee to the Supreme Court except in extraordinary circumstances,” he argued. “They must prove by actions not words that they are in the mainstream rather than we have to prove that they are not.”

Schumer’s stance was at the time was unprecedented. Certainly judicial nominations had taken on a partisan bent over the prior two decades, but there had always been lip service to the notion that the president gets the nominee he wants (the “presumption” Schumer alludes to above). The party out of power typically crafted some pretense for opposing the nominee. Schumer dropped the act and admitted that it didn’t matter who Bush nominated, Democrats should oppose them no matter what.

Flash-forward to 2016, when a vacancy opened up on the Supreme Court following the death of Antonin Scalia. This time of course President Barack Obama was the one selecting his replacement, and Schumer was horrified that Republicans were blocking his eventual nominee before he or she was even announced.

Here, [Mitch McConnell] doesn’t even know who the president’s going to propose and he said, no, we’re not having hearings; we’re not going to go forward to leave the Supreme Court vacant at 300 days in a divided time. This kind of obstructionism isn’t going to last. And you know, we Democrats didn’t do this.

…even though that’s exactly what Schumer proposed a decade earlier.

When Merrick Garland was eventually nominated, Schumer then urged Republicans in a statement to hold hearings on the nomination, warning of “judicial chaos” if there were only eight justices:

Senate Republicans need to do their job and give Judge Garland the hearing and vote he deserves because the American people deserve a fully functioning court. Having a deadlocked, 4-4 court could lead to judicial chaos surrounding environmental protections, voting rights, and so many other issues that are important to everyday Americans. This delay has gone on long enough, it’s time for the Senate to do the job we were elected to do.

Which brings us to Schumer’s interview with MSNBC’s Rachel Maddow Tuesday night. Maddow argued that the Democrats should refuse to fill the empty seat for the entirety of Trump’s four-year presidency.

“It’s hard for me to imagine a nominee that Donald Trump would choose that would get Republican support that we could support. So you’re right,” he responded.

“And so you will do your best to hold the seat open?” asked Maddow.

Huh. I guess “judicial chaos” isn’t that bad after all, if we can now afford four whole years of it.

Ironically, Schumer is now guilty of arguing in public what Democrats accused Republicans of merely believing in private. Republican leadership never straight-up said they were opposing the Garland nomination because he was an Obama nominee, they went with the excuse that it should be left to the next president. Schumer doesn’t even bother with excuses: we don’t like Trump, so we’ll obstruct, end of story.

And as I noted in November when a Slate columnist also embraced the “keep the seat empty” argument, Republican rhetoric during the Garland nomination makes it hard to accuse them of hypocrisy, while Democrats’ statements over the past year will come back to bite them.

Say what you will about the Republicans’ rather transparent obstruction of Garland, the arguments they chose to forward won’t make them hypocrites come January. They argued the next president should choose the next Supreme Court justice, and now he will. Democrats will have a tougher time of it; their arguments were loftier, that blocking Garland was “disrespecting the Constitution,” that the GOP was “undermining the Supreme Court.” Like Lithwick, they claimed to be above politics, making it all the more awkward for them in the coming years when they inevitably embrace their position as the new obstructionists.