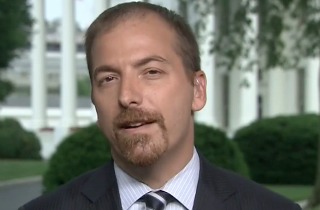 Anyone following Meet the Press host Chuck Todd on Twitter may have got an eyeful Friday morning when he inadvertently tweeted a photo of his crotch.

Todd snapped the photo to prove that he is wearing a seatbelt when broadcasting from a bus that’s taking him to states with tightly contested midterm election races.

“Folks. I am wearing a seatbelt,” Todd first tweeted to his concerned followers. “It blends in with my dark jacket. And I have the strap portion under my arm when I’m turned toward camera.”

Todd sent out a second tweet that said, “This is why you may not see the seatbelt on cam. But rest assured. I am wearing one.” Included was the photo of a seatbelt apparently strapped over Todd’s lap but also a closeup view of his jean-clad crotch.

“This seems inappropriate,” said a third.

We really could go on and on. But here’s the tweet.

This is why you may not see the seatbelt on cam. But rest assured. I am wearing one pic.twitter.com/ITuk4LUxsO