In the past few days, scrolling Twitter has been confusing for me because I’ve noticed that some of the people I follow have put ((( ))) around their usernames on the site. I puzzled over it for a while but couldn’t figure out what, exactly, everyone who had enclosed their names with parentheses had in common.

It turns out, one author I follow, Katha Pollit, was asked that question and responded like this: 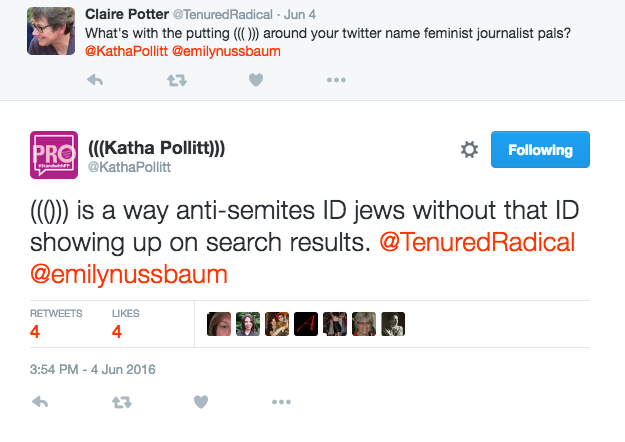 A little bit more digging revealed that she was right.

She was really right. 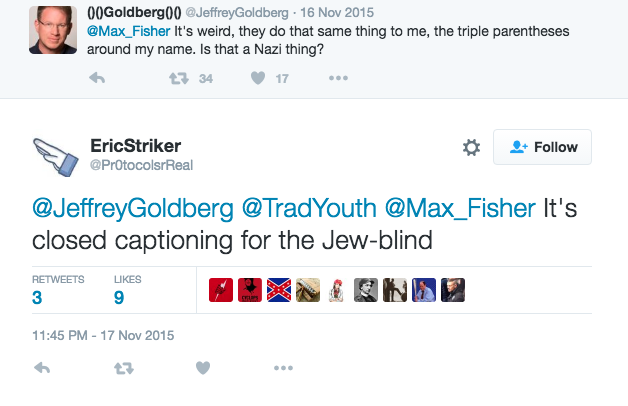 Plenty of big-time media members responded to learning of the marking by putting it around their own Twitter names. Think, maybe, of how hip-hop culture reclaimed the n-word or the movement for women to reclaim derogatory words used against them, but in a slightly more cynical, Internet-humor-based way.

Note, though, that the Atlantic‘s Jeffrey Goldberg has changed his ((( ))) to a new variation (perhaps because of advice to leave it all alone), where before, he had the same style as the others. Either way, anti-Semites are protesting a little too much for their blasé attitudes about the Twitter takeover to be taken seriously. 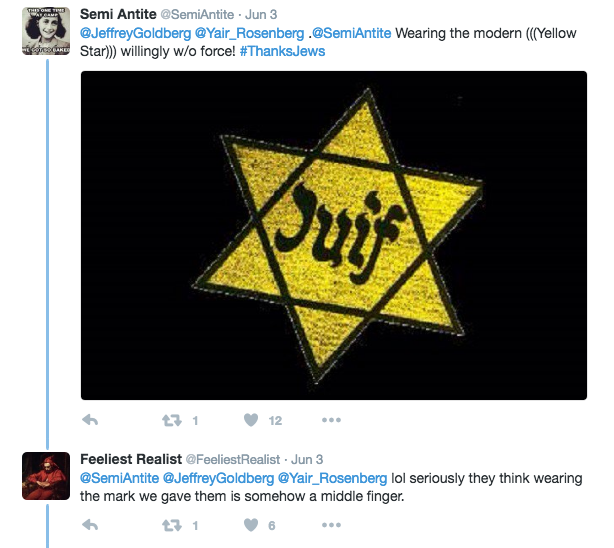 From Mic‘s investigation into the marking:

The origins of the symbol ((())) can be traced to a hardcore, right-wing podcast called The Daily Shoah in 2014. It’s known as an “echo” in the anti-Semitic corners of the alt-right — a new, young, amorphous conservative movement that comprises trolls fluent in internet culture, free speech activists warring against political correctness and earnest white nationalists. Some use the symbol to mock Jews; others seek to expose supposed Jewish collusion in controlling media or politics. All use it to put a target on their heads.

To the public, the symbol is not easily searchable on most sites and social networks; search engines strip punctuation from results. This means that trolls committed to uncovering, labeling and harassing Jewish users can do so in relative obscurity: No one can search those threats to find who’s sending them.

Reportedly, the “echo” refers to the way that Jewish names “echo” through history, always appearing in chaotic places on the human timeline.

Just as Jews have always existed, so, too, have the anti-Semitic among us. Currently, there has been an increase in their visibility. The entire (((trend))) was uncovered because Mic published a piece that focused on a Chrome extension called “Coincidence Detector,” which automatically put certain names within the parentheses. Before being yanked from Google’s extension market, it was meant to wryly show the “coincidence” that Jewish people are highly involved in media, politics, and entertainment.

In that piece, the writers stated that the conservative alt-right has been “emboldened by Donald Trump,” which is something that has been backed up by a number of those on the receiving end of targeted, faith-based harassment. Jonathan Weisman wrote for the New York Times that much of the anti-Semitic comments he receives come from “self-identified Donald J. Trump supporters.”

Trump has come under fire for retweeting white supremacists constantly and after his wife, Melania Trump, was profiled by Julia Ioffe in GQ, the reporter received so many anti-Semitic threats that she filed a police report.

Sure, there has always been anti-Semitism and white nationalism, but many believe that it has been much more blatant lately, which is why you will continue to see Jewish people (((self-identifying))) and non-Jewish people donning parentheses on Twitter in a show of solidarity for those whose names are being marked.