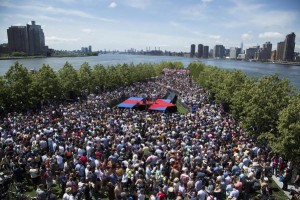 While compiling a roundup of the funniest Twitter reactions to Hillary Clinton‘s speech at Roosevelt Island, two rather interesting trends became readily apparent.

First, there were reporters everywhere at the rally. This comes as no surprise, considering how high of a media profile Clinton already has going into her official campaign push for 2016. Whether or not the journalists were outnumbered by her supporters remains to be seen. (At least, depending on what station you watch.)

The second came in the form of one tweeter’s observation that Clinton’s official Twitter account was live-tweeting the entire speech with prepared slides, quotes and infographics. Seriously?

Seriously. I switched over to Clinton’s feed and sure enough, the campaign aide running the account was hastily posting items in sync with all the talking points. Just in case everyone had forgotten that the event was taking place on Roosevelt Island, Clinton opened with a two day-late #TBT:

President Roosevelt said “there’s no mystery about what it takes to build a strong and prosperous America”: pic.twitter.com/JDse6Ute4s — Hillary Clinton (@HillaryClinton) June 13, 2015

After that, we saw old family photos:

“If you do your part you ought to be able to get ahead—and when everybody does their part, America gets ahead too.” pic.twitter.com/mP5wZAmJjL

“You figured out how to make it work. And now people are beginning to think about the future again.” pic.twitter.com/Y2O0eVp4Yh — Hillary Clinton (@HillaryClinton) June 13, 2015

There was plenty more use of the Clinton campaign logo’s interesting use of red and blue, as well as the “Republican” arrow pointing to the right:

What’s wrong with this picture? pic.twitter.com/GnytNmNS7A

That’ll give people who actually care about that “issue” plenty of fodder to analyze for awhile.

Of course, Pride Week got some colorful representation:

“They turn their backs on gay people who love each other.” pic.twitter.com/3zWcib9lpH — Hillary Clinton (@HillaryClinton) June 13, 2015

But let’s be honest, the real stars of Clinton’s live-tweet are the slides and the infographics:

Hillary wants to be the small-business president. Here’s what that means: pic.twitter.com/iRackYTo78

There’s no better word for this than the one Hillary just used: “Outrage.” pic.twitter.com/ZxKgfQiSVz

Seeing these reminds me of my school days, back when teachers tried to keep my attention with even flashier visual presentations on projector screens. It mostly worked, but this was before Twitter-capable smartphones became a reality.