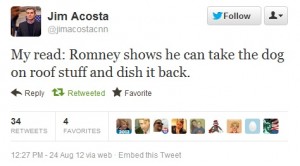 Republican presidential candidate Mitt Romney has finally managed to shift discussion away from his ticket’s views on “forcible rape” and abortion by making a naked appeal to racist birthers at a campaign event in Commerce, Michigan. True to mainstream media form, CNN reporter and Romney campaign embed Jim Acosta was quick to justify Romney’s remark, tweeting “My read: Romney shows he can take the dog on roof stuff and dish it back,” a reference to the President’s non-racist joke about an actually true thing.

“I love being home in this place where Ann and I were raised,” Romney told the crowd at a campaign event Friday, “where both of us were born. Ann was born in Henry Ford Hospital, I was born in Harper Hospital. No one has ever asked to see my birth certificate. They know that this is the place that we were born and raised.”

He followed that up by opining that “Isaac may be miles away. But Romney bringing the thunder today.”

Acosta also retweeted another user who noted that “Obama makes birther jokes, too,” to which Acosta added “Mugs too,” mugs, it should be noted, whose purpose was to mock the birther racists, not the President’s origin. Acosta’s observation is akin to saying that arsonists aren’t so different from firemen, since they both work with fire.

Like many cable newsers reporting this story, Acosta also noted that Romney, in the past, has generously allowed that he “accepts” that President Obama was born in the United States.

It’s fair to ask whether any reporter has a duty to call Romney out for this naked appeal to a racist fringe, bu then it’s also fair to ask if a reporter should be declaring that it isn’t. CNN’s brand, in particular, is based on a distinctly non-opinionated model of journalism.

However, if Acosta is going to offer an opinion, it ought to be based in reality. Set aside the context of the Romney campaign’s active participation in a broader Republican effort to appeal to racial resentment. Romney’s acknowledgment that the President was born in the US only deepens the racist appeal of his remarks, rather than mitigating it. The premise is that even though Barack Obama really was born in the US, people still ask for his birth certificate, but they know Romney was born here just by looking at him. People who believe the birther conspiracy can at least pretend it’s about their insane “evidence.”

This isn’t subtle, but if reporters are reticent to put themselves in the right’s crosshairs by calling it out, that’s understandable. It’s unfortunate, because journalism at its best should reveal the maximum amount of truth, but understandable. By the same token, though, it is unacceptable to then begin lawyering for the person you’re supposed to be covering.