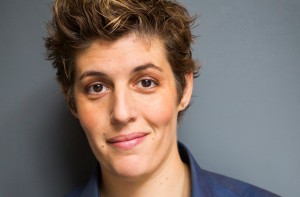 CNN political commentator Sally Kohn endorsed Bernie Sanders this past weekend, but it’s the reaction she got for one moment in particular that’s putting her at odds with some of his fans.

Anyone with an internet connection knows that a lot of Sanders fans really don’t like Clinton because of her Wall Street connections, problematic ties to a number of industries, her foreign policy record, and pretty much everything else strong progressives don’t like.

As she spoke yesterday at a Sanders rally, Kohn took a moment to make it clear she doesn’t hate Clinton, but her praise of the other Democratic candidate in the race (coupled with her saying Clinton would make an “extraordinary president”) received boos.

So she wrote a piece for The Daily Beast today clarifying that yes, she prefers Sanders, but has a problem with “shockingly vitriolic” supporters of his who don’t care for Clinton as a reasonable alternative:

Listen, I can sit around and critique Clinton’s positions on key issues as much as the next leftist. But I’m also honest enough to acknowledge where our visions overlap and praise her when appropriate.

I happen to think that Senator Sanders is 100 percent realistic about his goals for our nation, but his supporters are completely delusional if they think Secretary Clinton is evil. We can think Bernie Sanders is the better candidate without thinking Hillary Clinton is bad.

She’s also a little troubled by the fact that the Clinton campaign has been “far more unconditionally welcoming of the votes of Sanders supporters than vice versa.”

I suspect that, pragmatic rationalizations aside, Clinton supporters would also prefer their candidate not rely on big biz contributions

No. It makes you mean. And also incorrect. https://t.co/r4zD8WGIFm