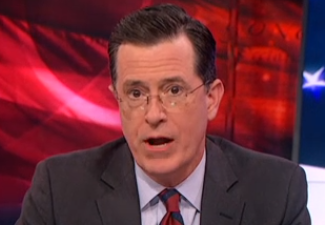 Stephen Colbert, in case you didn’t know this, plays a character on his TV show. A character that is purposefully ignorant. As he’s said in the past, “I do the show in character – and he’s an idiot; he’s wilfully [sic] ignorant of everything we’re going to talk about.” So bear that in mind as you read about people on Twitter calling for Colbert to be cancelled because of a tweet the show sent out that said some purposefully ignorant things.

The tweet was a quote from Wednesday night’s show, in which Colbert was making fun of Redskins owner Dan Snyder for responding to complaints about the team name by announcing a foundation to help Native Americans. The Colbert character figured if that’s all it took to deal with accusations of racism, then he could just clear up issues surrounding his character Ching Chong Ding Dong by announcing the Foundation for Sensitivity to Orientals or Whatever. Here’s the relevant part of the segment in question:

And here’s the tweet, which has since been taken down, with the relevant quote.

Regardless of the joke’s intent, people expressed their outrage by the score on Twitter, even getting #CancelColbert trending.

Do you support racist and transmisogynist humor? No? Then trend #CancelColbert now.

When satire becomes as offensive and hurtful as the thing satirized it is no longer satire. It is simply more injustice. #cancelcolbert

POC deal with racism every day and the real life DEADLY effects. & this clown profits off joking about POC pain. #CancelColbert Yes, please.

White people–please keep #CancelColbert trending until there's an apology. This is NOT the burden of people of color. Fix it. Do something.

#CancelColbert because these "jokes" once justified exclusionary acts, internment camps, atom bombs, napalm, and the murder of Vincent Chin.

Colbert has used the Ching Chong Ding Dong character in the past to rip Rush Limbaugh‘s mocking attempt at speaking Chinese.