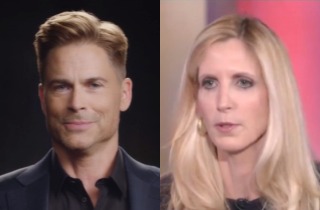 Ann Coulter was on the dias for Comedy Central’s roast of Rob Lowe, but it would seem her fellow roasters ended up burning her a lot more than their guest of honor.

Coulter was surrounded by a mix of comedians and celebrities on Saturday, and Variety reports that they took aim at Lowe for his sex tape, his many TV show cancellations, and multiple other subjects. However, indications suggest that many of the harshest jabs went towards the conservative commentator and frequent Donald Trump booster.

Here’s a sample of what the celebrity panel had to say about their fellow roaster.

Jeffrey Ross: “How do I roast someone from hell? Ann, you are the only woman ever to sexually harass Roger Ailes.”

Peyton Manning: “I’m not the only athlete up here. As you know earlier this year, Ann Coulter won the Kentucky Derby.”

Nikki Glaser: “The only person you will ever make happy is the Mexican who digs your grave.”

Jewel: “I do want to say as a feminist that I can’t support everything that’s been said tonight. But as someone who hates Ann Coulter, I’m delighted.”

David Spade: “Ann hopes the Republicans can hold onto the House so she can still haunt it.”

Jimmy Carr: “Ann is one of the most repugnant, hateful, hatchet-face bitches alive. It’s not too late to change, Ann. You could kill yourself.”

Coulter’s segment reportedly did not land well with the audience, and she was booed after plugging her new book In Trump We Trust when she got her turn at the lectern. Still, Coulter seemed to take things in stride as she returned fire and welcomed the room to “the Ann Coulter roast with Rob Lowe.”

Coulter launched some jabs at Hillary Clinton in addition to Lowe, but Hollywood Reporter said that her segment was marred by technical difficulties. When Lowe was asked about why Coulter participated in the roast, he responded with “I think the best daises, are daises where you’re like, ‘what the f*ck.'”

The roast special will premiere at 10 p.m. ET on Labor Day.