Think The Country Is Divided Now? Just Wait Till November 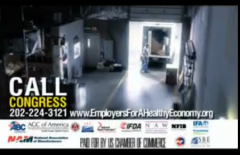 Can it be possible that when it comes to bitter partisan divide we haven’t seen anything yet? Last summer’s Tea Party/Town Halls appeared to take much of Washington, and the media, by surprise (and by storm), but with this November’s midterms already looming large on the political horizon (they are more than seven months away in real world time) it’s entirely possible those were just a warm up. To what exactly, one shudders to think.

With that in mind, Time’s Michael Scherer takes a look at some expensive anti-health care ad currently blanketing parts of the country and basically concludes it may be time to fasten your seat belts.

Across the country, groups on all sides of the health care reform debate have been targeting swing members of Congress with costly ad campaigns. Over the coming week, as the House gears up to take a final, deciding vote on reform, issue-ad spending by corporations, trade groups, unions and advocacy organizations may top $24 million, adding to the estimated $200 million that has already been spent on health care advocacy ads. “We are going to be at parity with the other guys in spending for the week,” said one pro-reform organizer, who had been monitoring the antireform ad purchases. “I think our side will spend $12 million for the week.”

Most of these advertisements come with little or no disclosure about what specific companies, unions or individuals are providing the funds. Thanks to the recent controversial Supreme Court campaign-finance decision in the Citizens United case, the ads also offer premonitions of what many of these same members of Congress may face in the fall, when unions and corporations will be able to spend money anonymously to advocate for candidates’ election or defeat in the weeks before the polls.

Below, an anti-health care ad. Below that, the Dems push back with a anti-anti ad.