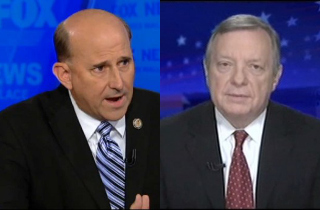 As a country numb from all-too-regular news reports of domestic violence and shootings, it takes the most shocking of shocking events to get our attention enough to generate a call to truly change things.

The mass murder of 26 children and teachers in Newtown is the other.

The tragic part of having such a short list?

That more haven’t been more impactful on our national psyche, including several from this year alone:

But when looking at the list of top Google searches of 2012, even the Aurora theatre massacre couldn’t crack the Top 10.

But Newtown is obviously on a whole different level given the ages of the completely innocent kids (6-7 years old) and brave teachers who lost their lives for absolutely no reason. The story has created the biggest firestorm in the history of social media, and that’s a very good thing. On my Facebook page alone, there are hundreds of posts from friends with kids, single friends, people who never post…all echoing the same sentiment:

On the cable news shows, this is obviously the only topic of the day and likely the week. On FOX News Sunday, Chris Wallace turned to the issue of gun control with a balanced slate of guests:

Joe Lieberman (I-CT), Dick Durbin (D-IL) and Louie Gohmert (R-TX) were each interviewed independently for their perspective on how to solve the problem. The true debate came down to Durbin and Gohmert, as both calmly provided strong points…at least until the topic of assault weapons was raised to the latter (more on that in the moment).

Durbin, as expected, advocates a ban on assault weapons and announced he will open hearings on the subject in the next few weeks. His argument is etched in logic: No one is here to take your gun away, he argued, but “why in the world would anyone, even (the shooter’s mother), need a military assault weapon, designed for the military, that has the capacity to fire off hundreds of rounds?” he asked. “I’m all for sport and hunting and self-defense. This goes way beyond that.”

Gohmert followed with his argument for more guns. To the objective person, his viewpoint is also a strong and lucid one:

“I wish to God (the school principal) had a gun locked up her office,” said Gohmert, “so she could have taken off the shooter’s head.”

The unarmed principal, Dawn Hochsprung, died heroically while trying to stop the shooter.

But when Wallace pressed Gohmert on the need for assault weapons, the reasoning behind his position went beyond ridiculous:

WALLACE: Why do they need these weapons of mass destruction?

GOHMERT: Well, for the reason George Washington said a free people should be an armed people. It ensures against the tyranny of the government. If they know that the biggest army is the American people, then you don’t have the tyranny that came from King George. That is why it was put in there, that’s why once you start drawing the line, where do you stop?

In the winning-Powerball-three-times-in-one-lifetime chance the U.S. government did decide to wage war on its own people (where are we, Syria?), it is extremely doubtful that owning the kind of arsenal the CT shooter possessed would stop smart bombs from falling from the sky or tanks from rolling through the streets. It is such an utterly absurd argument and scenario; it should be an embarrassment to any coherent adult who states it.

Still, Gohmert’s original point around basic firearms used for protection is a sound one. If one individual at each school could be professionally trained, perhaps they can stop a violent act or at least limit a death toll in the process (it feels cold just writing that).

Again, it’s not a flawless answer given that a shooter may be armed to the hilt, but it certainly beats the alternative.

So can both sides be right?

In this case, yes.

So here’s the solution:

Again, no solution here is flawless. There are still 300 million guns owned in the U.S. today (and that’s just legally). The toothpaste can’t be put back in the tube in terms of getting those weapons back. Stronger gun laws and more restrictions are a good start, but still won’t prevent any individual with no regard for human life (including his own) with access to weapons already in his home from taking action.

Reality says we’ll still be a relatively violent country, but if taking the steps outlined above, considerably less violent.

And we’ll finally be a nation that uses all available resources (without much additional cost) that better protects its children from monsters like the one who made this country a darker one on Friday.

There is plenty of room for compromise here.

There is no election and swing state gun advocates to worry about.

This can get done, but it has to happen while sentiment is still so fervent.

Six of eleven of the deadliest shootings in U.S. history have occurred in the past five years alone.

It can either be the new normal…

Or the rallying cry being shouted from most reasonable people across the land: