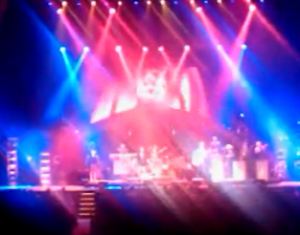 Last night Conan O’Brien came home to New York, bringing his “Legally Prohibited From Being Funny On Television” tour to Radio City Music Hall to a sold-out crowd. We’ll have more from the event later today, but first a treat for music fans: Conan and the band performing The Band, as in “The Weight.” I mentioned in my write-up of the Toronto show that they’d performed “The Weight” as the encore in Toronto, in homage to the city (very Conan-friendly, and the host acknowledged that) and, of course, The Band’s Canadian roots. It was a showstopper — and went over so well that they continued to take it on the road, coming out to a standing ovation at the show’s end and delivering an extended encore that lasted probably about 8 or 9 minutes. I captured 5 of them — it’s Blackberry footage, so not the best, but my camera battery had run out. Still, nice to have. Note Conan running up into the aisle during the instrumental break, shaking hands and, I’m pleased to say, stopping at my row for a nice group hug. Aw.

Apparently the encore was “The Weight” in Atlantic City as well. What’s great about this song, too, is that we get a chance to hear the Coc-ettes, Conan’s backup singers, really go to town. They are amazing. Also amazing: Getting a packed Radio City Music Hall on its feet jamming to…The Weight? So very hipster. Well, he did have Vampire Weekend earlier. And Stewart and Colbert. That’s coming shortly.