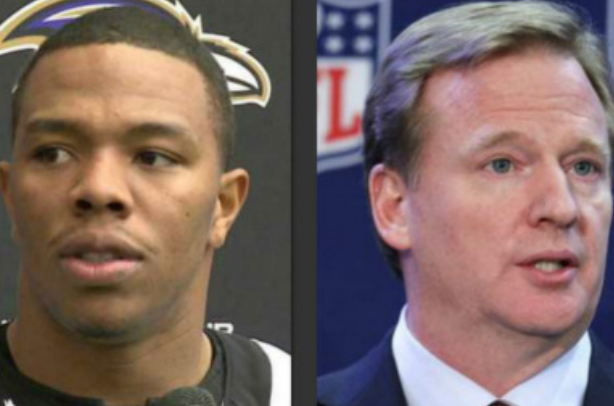 Today cable news does a pivot we witness now and again… that pivot when a sports story is so transcendent, it makes its way into the A blocks on MSNBC, CNN and Fox News. Legal analysts are paged like ER doctors, all told to get to the studio STAT. Sports contributors–whose time under center comes only every couple of months–get the spotlight for a little while as well.

Exhibit A today is Ray Rice, former Super Bowl winning running back for the Ravens. As you may have heard, the former Rutgers star had his contract terminated by the Baltimore organization after a new video emerged of the 220-pound bowling ball violently knocking out his then-fiancée on an Atlantic City elevator. Once again, TMZ is ahead of the so-called mainstream media by a country mile.

The league claims it hadn’t seen the “new” video until today, Monday. An employee at the now-defunct Revel Hotel and Casino tells TMZ that the NFL had seen the video before suspending Rice for the paltry two games he originally got. Pete King of Sports Illustrated (arguably the most respected NFL writer in the business) and Jane McManus (of ESPNNewYork.com) back up the claim of said employee. It’s a pretty simple question to ask: How could NFL investigators or the New Jersey District Attorney’s Office not have been privy to the tape already? It’s a casino…it’s not like it’s a shock there are eyes in the sky everywhere.

So does Rice deserve to be suspended indefinitely, as Goodell declared today? Of course.

Does “this piece of sh– need to be out of the league. Period,” as former Browns and Saints linebacker Scott Fujita tweeted today. Yes. Even if a lifetime ban seems harsh, a good argument can be made that an example has to be set. Of course, the players union will never allow that kind of punishment to happen to a first time defender, but that’s story for another day.

Should Rice be in a prison cell? Based on the overwhelming evidence… yes. A 220-pound professional athlete with that kind of power could have very easily killedthe victim , Janay Palmer, with that kind of blunt force.

So cable news now does a dance we’ve seen many times before. The lyrics change but the song remains the same:

Another black eye to the National Football League…

Will this turn fans off from the sport once and for all?

Is Roger Goodell‘s job in jeopardy?

Pundits of all stripes will predict doom and gloom for the league. We’ll hear about this being the end for Goodell. We’ll be told the NFL has a really, really serious PR problem that needs to the be fixed NOW or else.

Well, guess what? As we’ve seen before and as we’ll see again, the NFL is made of Teflon. So is Goodell with the billions he’s made for the league, for billions he’ll continue to generate year after year. One player–even a star like Rice and his deplorable actions–won’t change that. The NFL will continue to thrive like no other business. Bad behavior isn’t leading to a loss of any fans. The NFL–for better or worse–is the closest thing to an invincible entity in America right now.

Do you know how many players were suspended to start this season alone? 29 players. 29. That doesn’t include Jim Irsay, the Colts owner suspended for DUIOOAH (Driving Under the Influence of oxycodone and hydrocodone). Most of the suspensions fall under the league’s substance abuse policy, the Niners’ Aldon Smith for making a bomb threat at LAX nothwithstanding.

Baseball gets hit hard in the PR department any time a player is found to be using Performance Enhancing Drugs (PEDs). Bonds, McGwire, Clemens, A-Rod. All villains. All discussed at long length by various cable news panels.

NFL players committing the same crime? Not even a peep.

In all, the NFL will generate an estimated $10 billion in revenue this season. Want more numbers? 23.4 million people watched the season opener last Thursday night (Seahawks-Packers, both small market teams).

So even the championship-clinching games of the three other major sports in the country couldn’t sniff a Week 1 NFL regular season game. How big is the NFL again? Its draft had 32 million viewers watching on the NFL Network and ESPN. It’s also an interactive cultural phenomenon: 29 million, including eight million women, will play fantasy football this year, according to the Dayton Business Journal. Fantasy is so popular this year, the CBS Fantasy Football App crashed for about an hour on Sunday due to the overwhelming traffic.

All of these numbers aren’t being shared to pat the league on the back, particularly with the patently-piss-poor way it has handled the Ray Rice situation from the moment the original video emerged of him dragging his unconscious fiancée out of that Atlantic City elevator… to the limp original suspension of two games… to somehow not having seen the horrific video that is dominating the news cycle today.

But–and this is the hard truth–the NFL will not suffer in any way, shape or form after this story goes away in a day or two.

Tonight the Giants visit Detroit and the Chargers are in Arizona.

The ratings will once again be huge. And people will watch for a variety of reasons:

Love of team. Love of fantasy team. Love of potential profit (some call it gambling). Love of violence and the game itself regardless of who’s playing.

Because outside of maybe half the quarterbacks and a few running backs and receivers, almost every other player is expendable, exchangeable…at least from a marketing perspective.

And most simply don’t care about PEDs, off-the-field conduct or the quality of character of the people under the helmet.

Ray Rice will be the most hated man in America tonight. He and the league will be scorched by pundits and hosts alike, and rightly so.

And the short- and long-term effects when all the noise dies down?