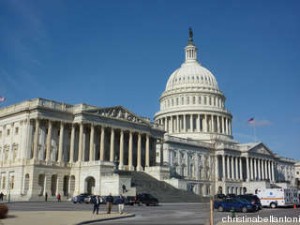 Congress has always been Washington’s whipping boy, particularly near election time. The antics get sillier, the pace shifts from glacial to gridlock, and the frustrated public gets daily reminders that lawmakers are often too mired in politics to function in the national interest.

What is news is that this time it’s starting to scare the pros.

The GOP’s hyper-partisan turn after Barack Obama‘s victory in 2008 meant 112th Congress was destined to test the limits of dysfunctional governance. But it also happened to coincide with a moment in history when the country needed the government to do better than the bare minimum. Instead, it’s done less. And that’s shaken people who’ve spent their careers steering the ship of state.

“I do believe that we are now in uncharted waters when it comes to the dysfunction in our political system–and it is no longer a joking matter,” former Defense Secretary Robert Gates told an audience two weeks ago at the Constitution Center in Philadelphia, where he received the Liberty Medal for national service. “It appears that as a result of several long-building, polarizing trends in American politics and culture, we have lost the ability to execute even the basic functions of government much less solve the most difficult and divisive problems facing the country. Thus, I am more concerned than I have ever been about the state of American governance.”

The remarks were first flagged by The Atlantic’s Jim Fallows, who noted the importance not just of the sentiment, but of who said it.

“I specifically recognize how carefully he has always chosen his public words,” Fallows wrote. “For such a person to say plainly that the American government has lost its basic ability to function, and that he is more concerned than he has ever been about this issue is … well, it’s worth more notice than it’s received so far.”

Gates led the CIA and the Defense Department under different Republican presidents before Obama reappointed to the latter job. So he’s not some fiery partisan. And he’s also not alone.

“I’m very careful [when I talk to European leaders],” Geithner said. “I want you to know I’m very careful. I always say to them, we have tremendous challenges as a country. And we have terrible politics in our country. It’s not just in Europe, terrible politics in our country. And we have a lot of work to do still to deal with our problems.”

While the U.S. economy sags and its infrastructure decays, Congress can barely agree to fund the government, let alone do anything of positive value. The most recent brinksmanship risked both a shutdown and the cessation of federal disaster relief in the wake of major hurricane. But it’s hard not to conclude that the debt limit debacle, which actively hurt the economy and resulted in a policy prescription that’s the opposite of what the nation needs, signaled to even career public servants that the Congress has veered into dangerous territory.

In a number of venues recently, Fed chairman Ben Bernanke has tactfully warned Congress that in numerous areas they’re playing with fire. The debt limit was the nadir, but the ideological tussles over federal safety net programs, he’s suggested, have left Congress unwilling to address what he called the “crisis” of long-term unemployment, and poised to do more to harm the economy. Now, when the economy needs more money flowing out of Washington, lawmakers are cutting back, and in the future, when the budget will have to be consolidated, Republicans are making it impossible by rejecting any and all tax hikes, and insisting the country swallow massive entitlement cuts that Democrats (and the majority of Americans) don’t want.

With unemployment just above 9 percent, House Majority Leader Eric Cantor (R-VA) said recently that people shouldn’t expect bold action from elected leaders, “I think at this point Washington has become so dysfunctional that we’ve got to start focusing on the incremental progress we can make,” he said. “Both sides have their desires to do the big bold things. The problem is they’re just vastly different…. We should certainly focus on trying to put some wins on the board.”

It’s a bit galling coming from Cantor, who has agency in this and who’s done as much as any other member of Congress to make sure nothing big happens. But he isn’t wrong. And with each new monthly jobs report, and each new development in Europe, the people who’ve lived through past eras of gridlock — who aren’t up for reelection in 2012 — get a little bit more nervous.

Note – this post was written by Brian Beutler for Talking Points Memo and appears here via a content sharing agreement with Mediaite.